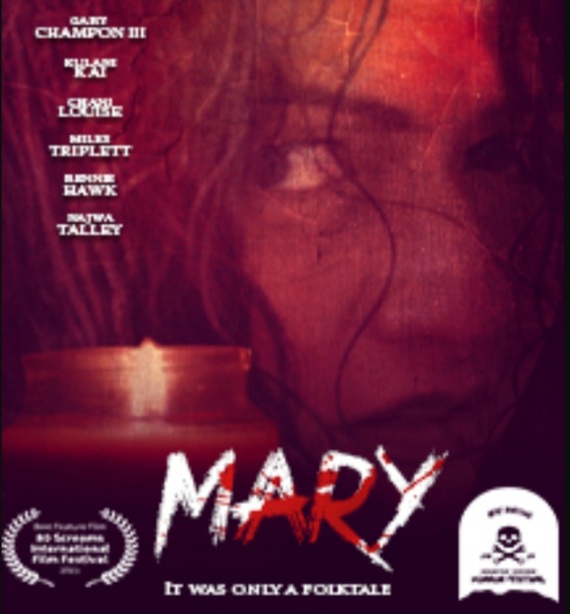 The tale of Bloody Mary is an old one. The story dates to a time when death wasn’t always confirmed accurately. One method was to place a mirror under the nose of one thought to be dead, and if there was no condensation, then the assumption was made. Well, they weren’t always right and folklore says a girl named Mary was an unfortunate victim. Thus, saying her name three times before a candlelit mirror gave you an eternity behind the glass. In keeping, Mary, by Khiray Richards, takes an old story and makes it shockingly new.

The 72 minute horror thriller begins with two teachers who are taking a few days at a secluded getaway. Drew (Krystal Farris) reveals that her students have provided her with the new and improved version of the Bloody Mary conjuring. Brayl (Kulani Kai ) is intrigued, and off on vacation, Kai’s performance yields a perfect middle school sense of adventure that seeks a harmless scare.

Unfortunately, Brayl is not privy to an ominous score that warns us otherwise. So in the bathroom, she finds the nearest mirror, closes the door and – something happens. However, we don’t know what. But the rising intensity of the instrumental accentuates the mystery and provides segue to the main characters and their story.

Cassie (Najwa Talley) is desperate to get pregnant and Billy (Verlenzo Hawk) seems like he can take or leave fatherhood. Further complicating matters, Billy also gives indication that he’s not fully committed to being married to Cassie. But Cassie just makes the best of it in hopes of better things.

Next, Ellen’s (Chani Louise) life goes on display. She lives with her drunken, physically abusive father (J. Elliott) and his slap sending her to the floor, just chills. Heartbreaking, Louise’s reaction lets us know her character almost accepts her fate and survives by compartmentalizing her pain. Elliot’s menacing posture, verbal insults and constant threat of violence gives Ellen little choice.

Then we meet George (Miles Triplett) and Quint (Gary Champion III). On the surface, the brothers have a great and playful relationship. Triplett’s gregariousness conveys George’s desire to make light of any situation, and Champion plays a perfect sounding board to humor his brother’s silliness. But there is a hurt that underlies their lives. Quint has a heart condition and his place on the donor list is an ever-present concern.

Still, the duo doesn’t shy away from joking about – even in this case. So maybe the other characters can overcome too and why not embark on a getaway together.

Not so fast, they land at the same B&B as Drew and Brayl, and soon enough, the guests find that something unexplained is afoot. On the other hand, Triplett is just too good with the comic relief, and the good cheer of good friends resets any uncertainty.

Of course, the normalcy can’t last, and Bloody Mary hovering already, the quintet has got an adventurous spirit too. Thus, the actors set a similar tone as the opening scene, and drawn in by the human desire to be scared, it’s easy enough to forget how we were left in a lurch the last time.

The warnings of the score returns and the characters dangerously playing along, the stage is set for some blood curdling. Once again, something happens – and we’re not sure what. But in jumping six months forward, life has definitely changed for the five characters and figuring out exactly how becomes another puzzle.

The scenes intentionally lack clarity. Past or present, real or imagined, supernatural or in the natural realm, the shift back and forth plays with our hopes and fears and incrementally escalates the drama through doubt.

The cinematographic set up by Richards also does its part to reinforce the point. A mix of light and dark with shadows obscuring the tightly cropped framing of the events, the viewer can see what’s going on – but isn’t really sure. Eventually reaching a crescendo, the unraveling traps us and breathes life into a new, very scary Mary.

The tale of Bloody Mary is an old one. The story dates to a time when death wasn’t always confirmed accurately. One method was to