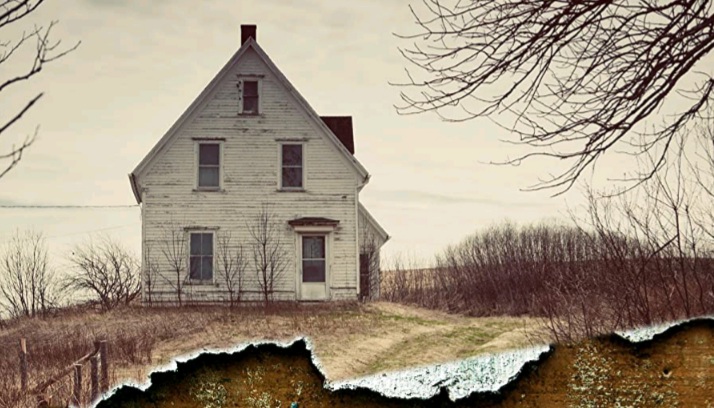 SOMETHING BEHIND THE WALLS

Something Behind The Walls is a visually beautiful thriller — making great use of its 1936 small-town setting — in the context of an overly stuffed (and therefore expositional) script. The source material, a piece by short fiction writer Thorp McClusky, seems better suited to Carpenter-esque horror comedies than the reserved filmmaking style used here. While writer/director Kit Wilson takes tremendous risks, ultimately the melodramatic acting, poor script, and overflowing story makes for campy pulp rather than genuine thrills.

In a 1930s small town, Dorothy (Angela DiMarco), is a disillusioned reporter from the city who visits a family farm to write her last story: a piece on the local folklore, particularly evil spirits that the farm’s owner (Ryan Sanders) claims have been killing off his animals. When Dorothy sees an evil, neon blue slime that dissolves the flesh off its victims, she realizes that the farmer was right.

This is where the story begins to deteriorate. As soon as the antagonistic blue slime is introduced, we are also introduced to a barrage of new characters: the farmer’s fiance (Mackenzie Wynn), a local mother whose daughter is missing (Michelle Shadday), and the missing daughter herself (Kailana Paresa). The amount of strong (if a little one-dimensional) female characters is commendable. Though all three of these characters have a more interesting storyline than Dorothy, our writer-protagonist, leaving a viewer to wonder why the story follows Dorothy and not the missing girl or the fiancé. Wynn’s acting is particularly stellar here — which unfortunately is only a reminder that, had she been the lead, we could have been watching a near-Jennifer’s Body cult classic.

Where the story lacks, the visual direction of the film compensates. We are launched into dynamic lighting that accentuates the complex composition of the shots, the full-frames, the beautiful location, and the well-themed props as the third act begins. A particularly stunning shot pops up around the 17-minute mark, when blue and yellow lights clash on a newly-possessed victim. Even the credits, which are composited over a hallway shot, are slanted in a way that matches the discomfort and oddness of this evil blue slime.

To address the slimy elephant in the room: there is something a bit odd about computer-generated neon blue slime being the antagonist in a 1930s period piece. Fans of early horror will be expecting practical effects, given the film’s setting, making computer generated effects come off as anachronistic as a Macbook Air would have been. The same goes for the film’s score, by Andrew Joslyn: the synthetic bass tones that we’ve come to expect in today’s horror pictures are more confusing than unsettling when put in the 1930s.

Much like the film’s main character, Wilson courageously approached a daunting task: directing a 20-minute horror period piece. It’s clear from his frames, costumes, and special effects that he is set to direct a feature in the near future. Hopefully it will be another period piece, so audiences can see his composition skills in the maximalist set design they were meant for.

SOMETHING BEHIND THE WALLS