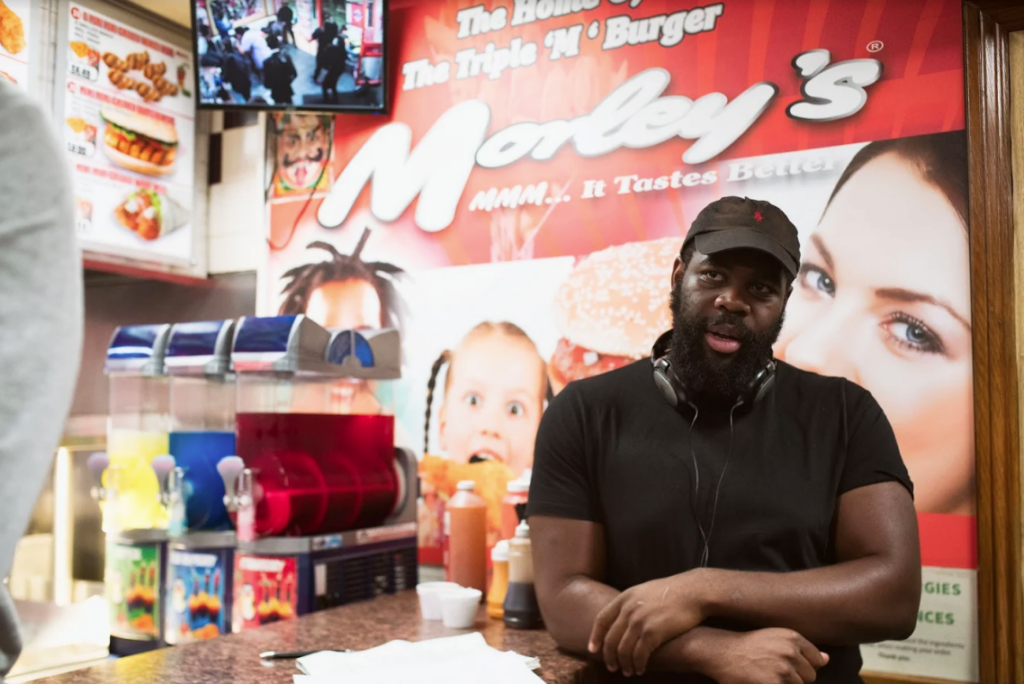 The characters obviously have different ideas about their allegiance to hometown. How does the story reflect your life and which one are you?

The story reflects the argument I frequently have in my own brain! I personally have different ideas about that allegiance to where I grew up. There’s so much more to the world, you know? And on a wider scale, I think of my ancestors, my heritage, people back in Nigeria (where my family are from) who don’t have the same opportunities to explore the world, freedom of travel, the means to be able to up and leave and access to jobs etc. It almost feels like I’m doing a disservice not taking advantage of all these privileges I have. But at the same time, home is home. It’s complicated.

What else provided the impetus to write No More Wings?

A lot of thinking for a few years about the same thing: people who I’d grown up with, how their lives had turned out differently and what it might be like for those people, any of them, to have a conversation today. I was curious as to how they’d look at each other and how they’d look at themselves in the presence of the other. I wondered what part the past played in who they’ve become today, how decisions made at a point where you’re still very much developing and figuring out who you are might have lasting implications.

Honestly, going into it I had no concerns. I didn’t think about it once. It’s perhaps a bit naïve or arrogant, but I understand everything those characters are saying, as do the people around me. I didn’t do anything to make sure it made sense to the audience; I watch things in the English language but with regional/geographical dialects all of the time and I’m able to make sense of it so I hoped others would be too.

At this stage, however, the film has now been online and out in the world. The first time it was out in the world, it included no subtitles and the only negative comments on the video was people asking for subtitles. Since then, we’ve always screened it with a subtitles option and people have expressed their gratitude in the comments for that.

When we submitted to Tribeca, we were strongly encouraged to include subtitles in consideration of the festivals typical audience and how a lack of subtitles might be a barrier to access. One thing that was important to me in subtitling was that it mirrored the actual words you heard rather than being distracted that the words you’re seeing on screen don’t match what you’ve heard. I observed that sometimes people just need to be able to read what they’re hearing to follow, because the speed of the dialogue combined with the unfamiliar dialect can lose them. I’m bilingual and know that I hate whenever I’m watching something in a language I understand, and the subtitles aren’t exact to overcompensate.

If I could go back in time, I wouldn’t change anything about the slang, I wrote a script that I wanted to be authentic to the world which it was meant to reflect and invite audiences into that – whether it be an audience that was familiar with that world and its lexicon, its colloquialisms, or not.

What did it take for the actors to learn to speak the slang and the dialect?

(Laughs) Nothing! All of those actors grew up in inner city London, they’re just as familiar with the slang and the dialect as I am. For the younger boys, I think the only slight tweaks would have been certain words they wouldn’t have been familiar as they were “before their time’ so to speak. But that doesn’t require any learning if the words are already script.

How did the actor/director relationship start and develop?

Of the four actors, I’d previously worked with Parys Jordon – he was in a stage play of mine back in 2017 I think it was. So our relationship already existed, I’ve always been open with him about how much of a fan I am of him and his work. With the rest, it started with our Casting Director Heather Basten who went out hunting for us. Ivanno Jeremiah is an esteemed actor in his own right so his ability was never in question, and when we had our first phone call, I knew he was the right guy for the script. He was passionate, generous and so very clearly knew this story in the same way I did (being a South Londoner himself). With the two younger actors – Tyrus and Joshua – the relationship was sweet. The first day of rehearsals I think there was a timidity about them both, having never met each other. I set them some homework, mostly to watch some videos from the noughties Grime era/scene in London so they’d know the kind of energy they needed to encapsulate in the shop. I remember how electric the second day of rehearsals was when I asked them to run that moment.

Things are pretty quiet for a city street. How did you figure out the best time of night to shoot the scene so there wasn’t too much exterior noise?

I don’t think that played any part in our decision making. I said I wanted to shoot at night on a whim because I thought it’d look good visually. We’d of course have never shot on a Friday night because that would be asking for trouble. But on the most part, I think our shoot dates was guided by availability of the cast and crew we wanted to work with, as well as what worked for Morley’s. We were fortunate in that the Morley’s we were filming in generally had less external footfall than some of their other branches in busier neighbourhoods would have had.

What judgements – if any – are you making about these two characters and their choices?

No judgements. I’m never judging. Only ever presenting perspectives; it’s for an audience to make judgements. Both perspectives counter each other and very much live in the grey because nothing in life is black and white.

With Covid and Gentrification – What’s happening with Morley’s and other businesses in the area?

I can’t say I’m sure about that; I’ve spent most of the last year in my house! I think what I have observed is the unfortunate news of businesses closing. Morley’s is still alive and thriving. They’ve been takeaway only for most of the pandemic, but I’d assume that the majority of their custom is takeaways anyway. They’re also on all of the delivery apps, Uber Eats, Just Eat and I’d assume they’ve benefited in that aspect. During the pandemic, they’ve opened something of a flagship/concept store in Brick Lane, Shoreditch, which is super exciting and I know they have some huge plans for that store beyond simply serving chicken and chips.

How did you find Morley’s and how did the cost of shooting at a local business influence where you shot the scene?

I grew up in South London, which is the home of Morley’s, so I’ve been eating it from childhood! Do you mean did it cost less because it was a local business? Or that was there a sense of altruism for me, in pouring into local business? If so, I’d be lying if I said any of those things came into the equation. It was quite simple for me: Morley’s was written into the script. The film couldn’t be set anywhere else but Morley’s, Morley’s is a character in itself.

How did you raise money for the film and did any local business chip in?

I won a global screenwriting competition, Soho House’s Script House. That funded the film and we didn’t have to do much fundraising beyond that. We went over budget a bit, but that came out of our (myself and producer Abiola Rufai) pockets.

The characters call each other Bruv and Fam. What do the names mean?

(Laughs) They’re not names! Bruv = brother/bro. Fam = family. They’re terms of endearment. How you refer to your friends. ‘Bredrin’ is another one, taken from ‘brethren’.

How did the younger and older actors interact off camera and how did those interactions help with delivering the roles?

That began in rehearsals if I’m honest. Ivanno and Parys, by virtue of age amongst other factors, are pretty experienced actors. They’re both similar in age to me and what was helpful about that was that we shared a lived experience of being teenagers in the mid-noughties, which is when the younger story is set. So through conversations about that period, the younger boys learnt from us what it was like back then, the energy I wanted them to encapsulate and depict on screen. But I think one of my favourite things we did was take all the boys to Nando’s for lunch. Going to Nando’s for the first time with people is always so funny because everyone’s secretly judging each other. What level of spice do they like? What sides do you for? Wait, you order the boneless chicken?!

It’s funny to observe and I think that was a masterstroke by our producer, Abiola Rufai, for us to go for lunch there. I think a bond was definitely created between the four in that moment which relaxed everyone, provided comfort and put us in good stead ahead of the shoot day.

What kind of reaction has the film gotten from the people in the area?

There have been so many stages of this experience and this answer. Firstly, in December 2019 we had a screening for about 400 people and included in that audience were many of the people I grew up with, went to school with. From those people, the film has been received terrifically. I mean, that’s been the overall reception of it all. But what’s been really special has been how those people have responded to it, people who are familiar with the environment, with the characters, the lifestyle. They would be the harshest critics and would have every right to criticise any inaccurate depictions they identified because it’s them, their story and their world being put on the screen. So for those people to receive it so positively has meant everything to me. More recently, since the film went onto YouTube, it’s been more widely available. I’ve seen comments on the video, received messages and seen on social media responses from people who I don’t know but have grown up in the same area. Once again, it’s been overwhelmingly positive. It’s felt so humbling to know that I’ve created something that people felt so deeply, especially those who are from the community which the film depicts.

What are the prospects for the kids and families that stay put?

I think that’s up to them. Home is what you make of it!

My attention is currently occupied primarily by two original television series that I have in development as well as my debut feature. 2021 is about knuckling down and doing what I need to do to get those to the next stage and one step closer to a screen which you can watch that on! I’ve got a few other things at various stages of development but the above three are the main things right now. Outside of my own projects, I’ve also been in and out of writers rooms and currently under commission to write an episode of a new series. And I’ve been directing for TV, too. I’m just excited to tell more of the stories that I’ve got bubbling away in my head and hopefully on a grander scale. 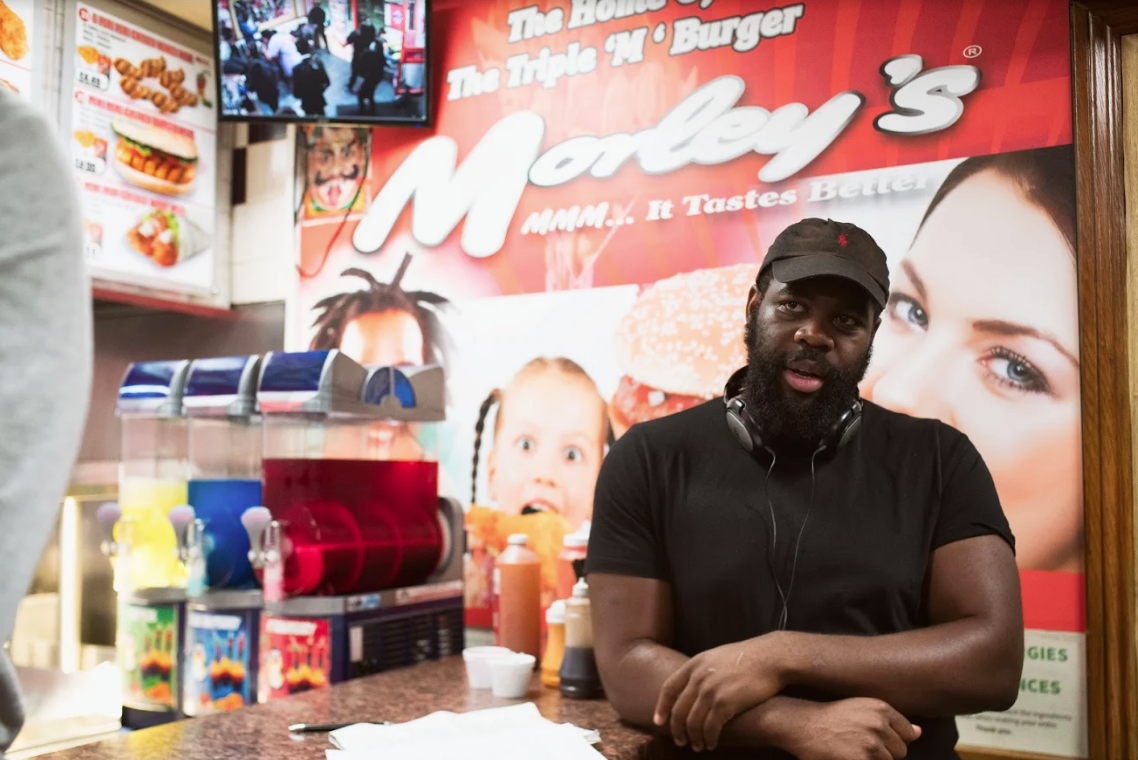 Writer/Director Abraham Adeyemi’s Award Winning Film NO MORE WINGS shares the story of two childhood friends who up and grow apart. The characters obviously have