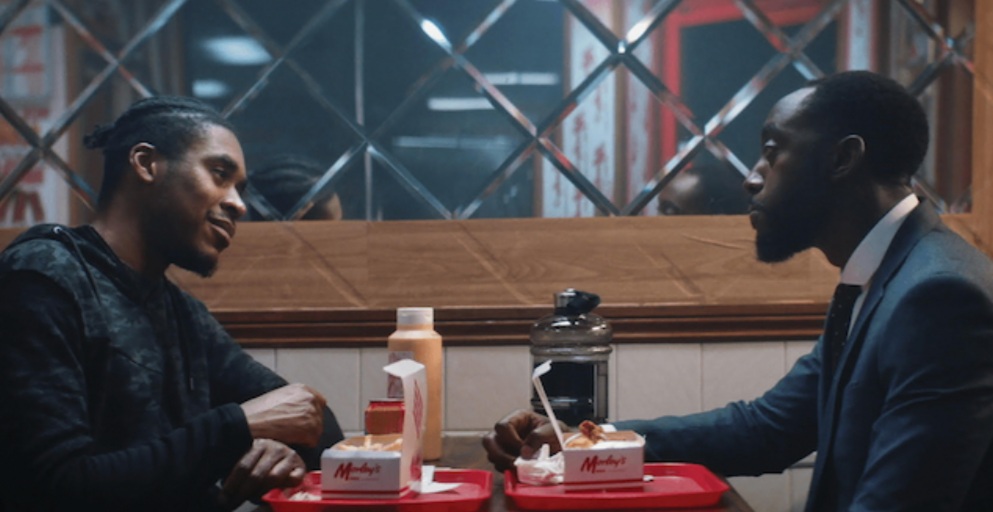 Some kids grow up and can’t wait to get out, while others never see a reason to leave home. The different mindsets obviously don’t put a dividing line between youthful friendship, though. But when the moment of truth and separation finally comes, can heartbreak overcome the emotional and physical distance in between? That’s the enduring question Abraham Adeyemi presents in No More Wings.

Flying in opposite directions, Isaac (Ivanno Jeremiah) and Jude (Parys Jordon) play the two parts in the ten minute short. Jude is down home and is dressed for the hood. Conversely, Isaac’s business proper attire has a clear message. Staying put is for the birds and he’s not shy to express the sentiment to Jude. “I always wonder why birds choose to live in the same place, when they can fly anywhere in the world,” Isaac questions.

Thus, the final clash of civilizations takes place at Morley’s – the duo’s longtime, hot wings, mom and pop hangout. But despite the commute that currently takes Isaac out of town, his heart and stomach hasn’t completely strayed from his home. “Those fancy places, ain’t got nothing on Morley’s.”

The homestyle slang both speak reinforces the authenticity of the boast, and the same goes for their whole predicament. However, the ensuing fist bump makes everything secondary for the two actors.

In other words, the onscreen chemistry feels like they really do go way back, and No More Wings actually gives us the backstory. Tyrus Mckenzie and Joshua Cameron show us young Jude and Isaac at Morley’s and both actors seamlessly bring their elders to life as kids.

Jude is a free spirit who chases the current whims that inspire him and believes his allegiance to home can give him all he needs. In contrast, Young Isaac tries to temper his off-the-cuff friend with a more pragmatic approach to life and the future. But the differences don’t diminish their friendship and probably act to strengthen it.

Nonetheless, they need the bond because their natures have translated to adulthood. Isaac puts too much stock in the material things and stature, while Jude’s freewheeling ways have caused problems at home.

Not too worry, they still have each other’s back, and you can really feel the care coming through the actors. “You’re the best father I know,” Jeremiah assures.

The actor’s eyes say it just as genuinely, and Jordon’s smile responds in kind. The timely switches back to the past lets us know where the tightness originated and solidifies the connection. Of course, Jude and Isaac always come back to what separates them and neither is persuaded.

So obviously, the couple knows what the future holds, and as they look back and forth, the reality becomes clear. The past is all they really have. But no matter the circumstance, that’s often true for most of us, and No More Wings dishes the truth in as touching a way as possible.

Some kids grow up and can’t wait to get out, while others never see a reason to leave home. The different mindsets obviously don’t put