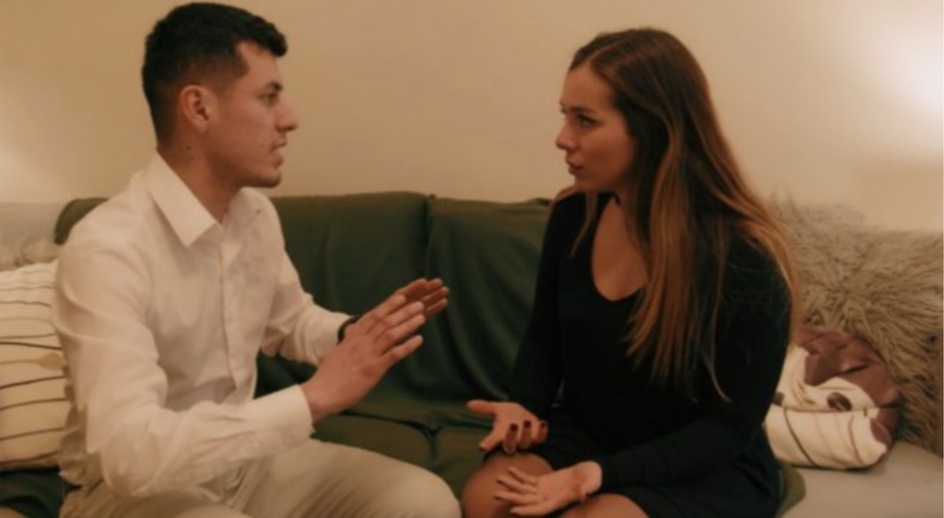 She said yes. The word every guy wants to hear when the bar is closing and his late night efforts are still up in the air. On the other hand, there’s always a randomness in play and Martin Ponferrada’s unexpected scenario in Sí really reiterates the doubt. So much so that the nine minute short gives those in the game something to think about, and suggests that both men and women should proceed with caution.

Anita (Luz Rodríguez-Basavilbaso) actually does the asking in this case and Carlo (Carlo Sardon) is more than happy to oblige. Off to a pretty good start, the barroom scene features just the couple, and along with the lack of any background noise, the Kaan Cansiz/Ponferrada cinematography evokes a tunnel vision that implies these two could be any of us.

That said, the action cuts to Anita’s place, and we don’t feel a hint of all the tawdriness that is possible. Instead, the attentive small talk conveys a sincere affection, and the banter sets the viewer at ease.

The same goes for the dialogue switch back and forth between English and Spanish. Both sharing English as a second language, the commonality creates an endearing closeness (and the focused cinematography continues to allow the viewer to step inside the character’s shoes).

Then the film’s plot twist is engaged, and the lesson plan begins. Anita reveals a violation from her past, and while Carlo is sympathetically taken aback, the abrupt nature of her admission reads on Sardon’s face. A light hearted romp now has serious implications, and the actor’s demeanor and staggered speech emotes moral reservations about going forward.

The matter of fact and almost dismissive way that Rodríguez-Basavilbaso details the events further escalates the apprehension for Carlo. Still, too much romantic momentum has accumulated, and next thing they are on the couch. His conscience fortunately gets the better of him, though, and all the uncertainties out get a hearing.

The conversation covers consent, the power dynamics involved, victimization, coercion and healing. The intricacies made get pretty nuanced and deciphering the point-counterpoint could take a degree in logic or the services of a good lawyer. At the same time, both parties seem oblivious to the fact the parsing of their respective points of view is too complicated to follow. But Carlo eventually gives voice to the overall failure to communicate. “This is too confusing,” he laments.

Of course, the rewind button allows the viewer to do what the characters can’t. Nonetheless, re-tracking the barbs back and forth do not clear up their positions, and there’s a good chance that neither will your own forays in this arena. So in public service of all the players out there, Sí implores that we recognize all the grey area involved, and the pause button is never a bad idea. So dinner and a movie, get a better understanding of each other and a whole lot of damage might be averted for both of you.

She said yes. The word every guy wants to hear when the bar is closing and his late night efforts are still up in the