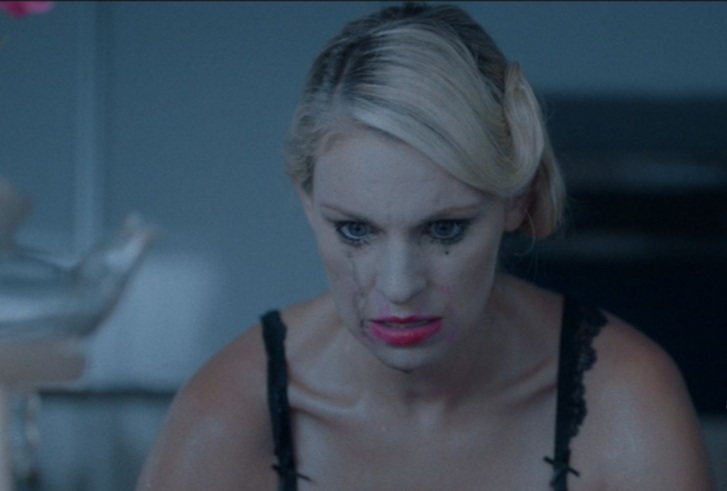 A very pregnant Claire (Murisa Harba) is rushed into the emergency room and from what we know about life, the pain expressed on her face must inevitably give way to joy. The sound of a new born’s cry implies the best and when we see the mother pining over her pride and joy, we wonder why this Daria Nazarova feature is called The Shattering. But we quickly see that something is off in this award winning 77 minute film, and sorry, the unraveling is worse than you could possibly imagine.

The story officially changes course when her husband Eric (Timothy Ryan Cole) enters with a therapist (Charlotte Beckett), and the once blissful mother is nearly comatose in response.

So we are obviously left wondering what has undone Claire. Did the baby actually die? Is Claire suffering from postpartum depression? Has a new baby put an unexpected strain on the marriage, and despite Eric’s intervention, is the impatience Cole exudes the main cause of the problem?

There’s also an issue with Claire’s mom, and Eric might also be having an affair with the therapist. So while the dire circumstance that Claire is enduring has your attention, it’s the lack of clarity that heightens the drama.

In addition, with the entire film set at home, there’s a boxed in feeling that doesn’t lend itself to any easy way out. At the same time, the impeccably manicured interior and antiseptic background that Sean Emer creates with his cinematography starkly contrasts two lives that are in danger of spinning out of control.

Either way, Claire’s problems are not imagined, and whatever Eric is up to, he is struggling to deal with the fallout. But we’re still not sure whether he’s sensitive enough to his wife’s situation or if any of us would suffer the same shortcomings in his place.

We are party to the mixed message as Cole lays it out in an impassioned outburst. Prompted by Claire’s unstable behavior, the actor perfectly blurs the line between selfishness and the committed devotion of a man who wishes he could alleviate his wife’s suffering.

Cole isn’t alone, because Harba does a pretty good number on the dichotomy too. Yes we feel Claire’s pain, but Harba’s performance has us asking whether she’s doing what she can to meet her husband halfway. Containing a noticeable dose of frivolity, the actress’ delivery has us asking if Claire takes any responsibility for the pain both are suffering, and the lack of seriousness suggests she’s not committed to getting better.

So again, we want to know what’s driving these characters and there’s almost a desperation to see this film through. The Shattering isn’t done leaving us up in the air either.

The final doubt comes in the form of identifying the film’s actual timeline. Weaved in between the flashbacks that recall a relationship once filled with love and all the details of Claire’s descent, the evolving thread meanders the mystery to the next level. So in complete dread, we’re left wondering what are we going to finally see when the clock runs out?

Let’s just say – set your alarm and brace yourself.

A very pregnant Claire (Murisa Harba) is rushed into the emergency room and from what we know about life, the pain expressed on her face