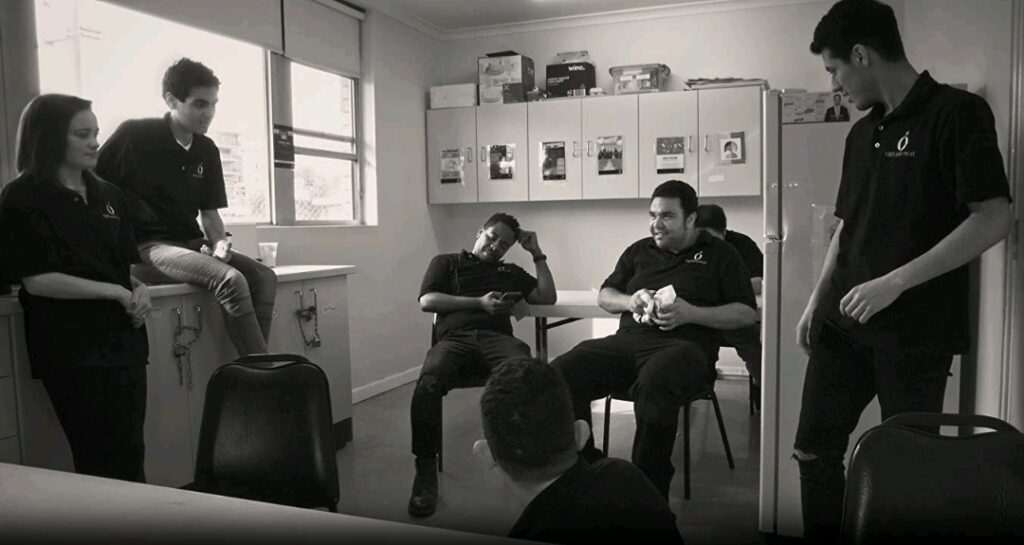 At work, we’ve all been in the lunch room. So Martin Ponferrada has given us a web series of the same name. Fifteen episodes in total, the cinematographic version looks a lot like the lunch rooms we’ve been in. At the same time, his Lunch Room is oddly different. A duality that makes it hard to turn away and requires a double take to rejoice in the magnificently subtle humor.

Coming across in stark black and white, the cinematographic choice that Ponferrada and Jesi Singh reiterates the comedic genre. In other words, the humor is stripped down to the basics without flash or fanfare.

Nonetheless, the company is called OzSuperMart, and apparently they are changing their logo. The company big wig unveils the artwork, and while the execs respond with only guarded surprise, the lunch roomers are uninhabited in calling the revelation out. “It looks like a vagina,” they agree.

The eclectics have begun and are upped in a game of Battleship. Wassim (Wassim Osman) has his ships on the vertical board, and after the amusement, the prescribed dose of normalcy settles Sorchia (Sorchia Daley) and Brad (Brad Free) into the hallway.

Twenty-somethings, they question where their lives are, and the manner in which this retail job is possibly holding them back. The easy interaction they and the rest of cast exudes feels as natural as when we were pondering such futilities and how to break free.

As expected, Brad throws a sarcastic little dig at the prospects of escape and the wry dry continues in the episode Sign in/Sign Out. Sorchia is tasked with the duty of making sure all these directionless misfits sign in. On the other hand, the troupe understands the upper management attempt to inspire professionalism, so the banality ricochets around the room. “I don’t really need botox treatment,” Daley’s deadpans leads the way, “because Snap Chat has filters.”

The characters aren’t alone in setting the tone either. Whether it’s a jazzy jaunt, the slow pluck of the guitar strings or the soothing brush of the snare drums, the multiple scores by Octave Inc and Fabian Orozco are so intentionally noninvasive. As such, the off-the-wall dialogue is recast as complete normalcy, and we are again brought into the lunacy as willing participants.

The familiarity goes up a notch by going intergenerational and interdepartmental. Matthew (Matthew R. Grego) is the prominent executive at the beginning, and a few decades older than his underlings, he represents the company man who sits in judgement of “these kids today.”

Of course, he’s jealous of their youth, and Grego’s stiff jawline and determined presence seethes with a quiet rage. The uncanny resemblance to Ned Stark (Sean Bean) of Game of Thrones doubles down the internal angst and turns his self-exalted status into comedy gold.

The other older chap adding to the age offset is Lamont (Darren Lamont). He’s the guy who never escaped the company, and since the chance for a better life no longer exists, the lifer has resigned himself to a role we’ve all seen before. Lamont knows the ropes, all the ins and outs and exactly what buttons to push. So he stirs the pot whenever possible, and the actor provides just enough aloofness to go under the radar as the devious poison pill in the mix.

There’s a few bogeys, though. In the episode Tall, Carlo (Carlo Sardon) and Julia (Jade Bowell) have embarked on a relationship, but the connection gets held up over a real issue. Julia reveals she is pursuing a career in law enforcement and the couple diverges. The standard talking points on race and police brutality are there. Unfortunately, the conversation is oddly out of place and actually feels uncomfortable.

There’s a few more scenes that also delve into relationships, and yes, they are touching and painfully real. But real isn’t supposed to be on the menu. Not to worry, there’s plenty to follow the main path that Ponferrada has embarked on so open your lunch pale – and enjoy the ride. 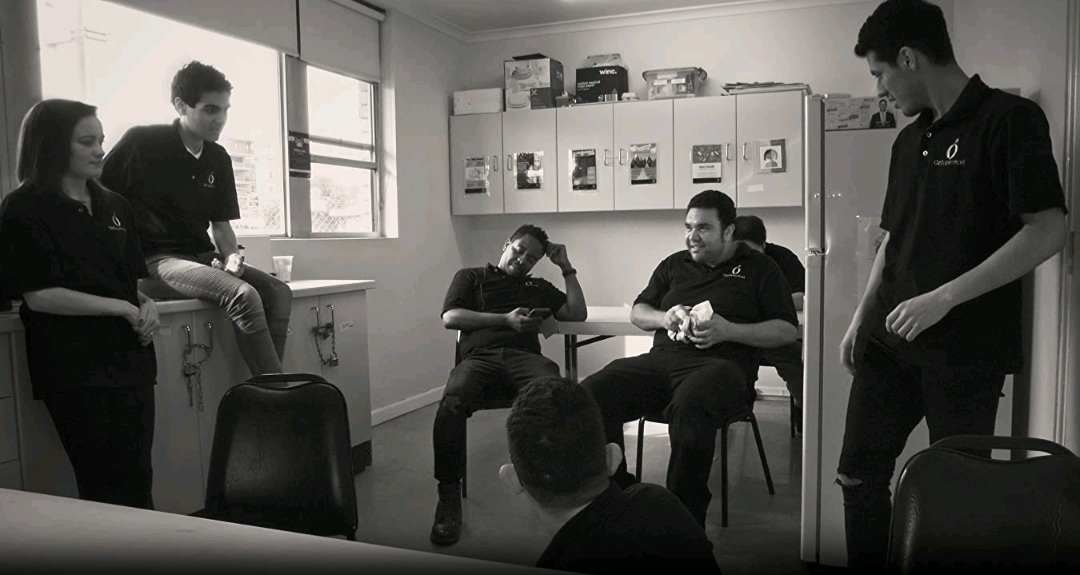 At work, we’ve all been in the lunch room. So Martin Ponferrada has given us a web series of the same name. Fifteen episodes in