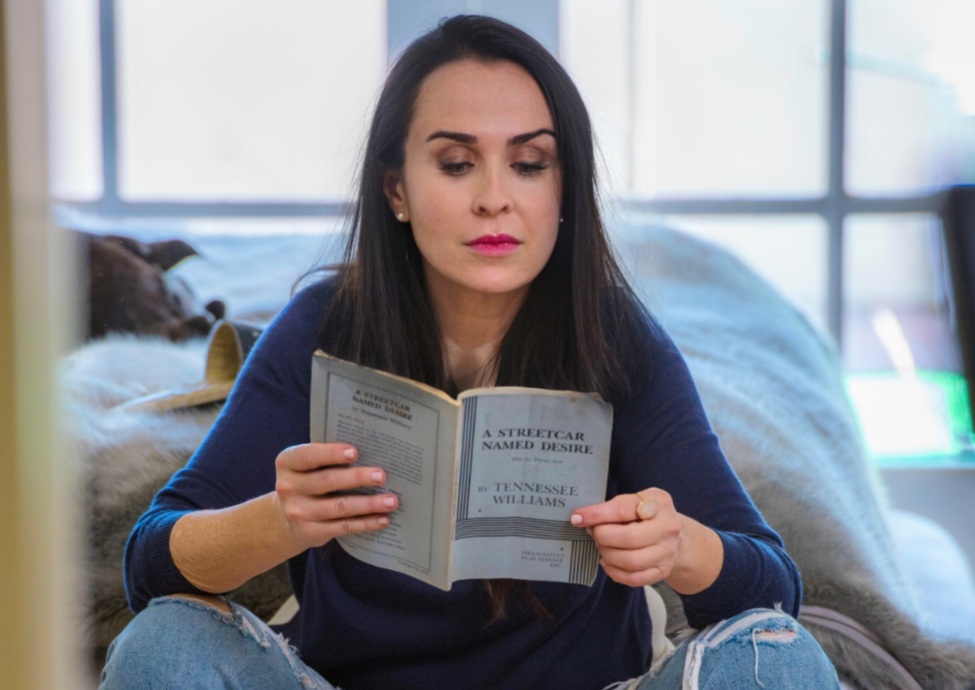 40ish follows the quintessential trials and tribulations of an actress in her forties, Natalie Silverman. She is vibrantly played by Nicole Stuart who also serves as the writer and producer of this award- winning short film.

We open with a flashback to 1995. A hopeful Natalie sits for a comically unfortunate meeting. It is her very first agent meeting and the agent, played by Feodor Chin, leaves Natalie with this parting piece of advice: “Move back to Vegas. You’ll be a star.” We are ushered into the present day with a narration that appropriately evokes the levity of the 1995 hit Clueless. This moment well sets the stage for the heart of this film to shine.

Tagging along from audition to audition, the film efficiently moves us forward in Natlie’s life as she endures the emotional and logistical ordeal of it all. Audition #1: Marcy (Algerita Wynn) watches Natalie perform a powerful self-chosen monologue from I Never Sang for My Father and, after berating her with reasons why women Natatlie’s age can’t make it, Marcy requests to hear the monologue again, “but this time more gangsta.” Why bother with this kind of lifestyle? Natalie suggests it might be sheer stubbornness in her narration to the audience, but when meeting with her therapist (Chase Winton) she’s able to remind herself of one simple truth – she loves it.

40ish does not limit the story to her professional meetings; instead, we also accompany Natalie on a tactful offering of pit stops into her personal support network. Her close friend Michelle (Andrea Lwin) physically supports her during a body wax appointment while commiserating with Natalie’s frustrations and providing a professional lifeline by way of a pilot audition opportunity. These moments do an admirable job of enhancing the realism of the world in an entertaining way without taking anything away from it, nor being a distraction – a show of tight writing.

Many would-be ‘bit parts’ steal scenes. With effortless believability, Andrew Schlessinger’s Bruce barely fights through his sandwich and personal phone calls to give Natalie’s audition any real attention. Later, the overly fortunate old friend, Gayle, is brought to life by actress Brooke Lyons with a pitch-perfect, stinging lack of humility and faux-pleasant demeanor. These key players and the entire cast support an impressive performance by Stuart – who takes full advantage of the character’s varied slew of auditions.

The film is directed by Traci Hays with a light touch and presented with a very clean look thanks to cinematographer Greg Cotten, which gives the story center stage and makes for an enjoyable experience. Even within just under 25 minutes, Stuart’s writing marries with the editing of Matt Marquez for several clever transitions and call-backs which do not feel forced; rather, they keep the audience engaged and invested. The film’s emotional accessibility is undeniable; when Natalie jumps for joy, you jump with her.

There is also a meta quality to 40ish. Knowing the story is “inspired and based on true events” provides a subconscious optimism. The audience can watch our sympathetic protagonist manage the struggles of an actress under the warm blanket of imagining that, no matter what happens, she may very well go on to write the Nicole Stuart version of Natalie Silverman’s 40ish.

40ish follows the quintessential trials and tribulations of an actress in her forties, Natalie Silverman. She is vibrantly played by Nicole Stuart who also serves