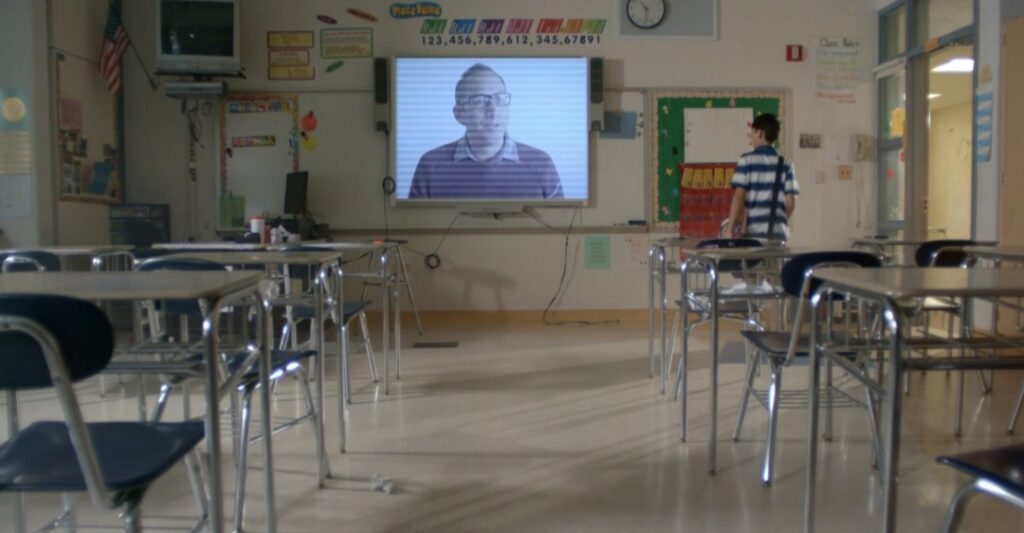 Twelve year old Arthur (Eric Ronen) gets a message from the future, and it comes from the older version of himself (Jimmy Loram). His four best friends will not be in his life, and the middle schooler needs to act now to make a better future for them and himself in Arthur Futuro. The 20 minute TV pilot by Joseph Morabito is not quite Sarah Connor taking on The Terminator, but it’s not supposed to be, and given plenty of quirk, cuteness and general congeniality, the cliffhanger ending will have viewers eagerly waiting to see what the rest of the series has in store.

From the pen of Ryan Moore, a first look at Arthur is in the future tense. Appearing on a smart board in an empty classroom, his black rimmed glasses, far from a dangerous fashion sense, and squirmy demeanor, shows that the title character didn’t kill it as a kid – or an adult.

We’re definitely off to a good start, and the opening credits with score further sets the tone. The instrumental races like the opening of a hip, mainstream investigative police show, where a fact finding journey unravels the crime and/or mystery. Except kids are the main characters. So the beat aligns to the demographic, while assuring the audience that this adventure has no intention of taking itself so seriously.

That said, Arthur (Eric Ronen) seems to take his surroundings in stride, and his crush on Isabella (Sophia Valinotti) doesn’t seem so urgent. Not to be outdone, Ferd (Daniel Cunningham) is sleeping through school, Melanie (Adison Eisenberg) has got a flower power vibe that idles in neutral, and Ava (Angelina Palma) seems long past the point where life ever raises her temperature above luke warm.

Yes, the quartet is a pretty laid back clique, and the low key works well with this group of young actors. They all do a good job carrying their personalities, but probably lack the seasoned timing of their acting elders. So when it’s time to deliver, the built-in lack of flash gets the LOLs out in good number, and overall, a pleasing amusement hangs over every scene.

The use of some very basic chords and cheesy notes has a similar effect. It’s like we’re continually reminded that Arthur Futuro is a nice little Indie effort, and the bar not set so high, the off kilter humor just flourishes alongside.

The cast of adult characters help carry in kind too. Mr Toot’s opening joke about wedgies is pretty sophomoric. But Jeremiah Caleb knows he’s not starring in When Harry Met Sally so his potty humor comes off just right.

Up next, H. Clark Kee steals the show as the Russian Aftercare instructor. Dressed in old man gym shorts, pulled up socks and the obligatory whistle, he pines for Putin and makes no bones about the dictatorial manner in which he maintains his sphere of influence. An eye toward history too, the delivery of Kee’s authoritarian punchlines comedically lay waste to the landscape like he yearns for the lost imperial glory of Mother Russia.

Just as passe and impotent as Czar Nicholas II, the kids easily let the cartoonish character slide off, and saving the future, according to older Arthur, means the group must find an electromagnetic disruptor. No clue as to what that entails, Ava’s dad could be the key.

But the assistance of this self described, “man of science” doesn’t really assure. Oblivious, Anthony Frank Coppa goes onto babble about the intricacies of the universe, and in his unwarranted confidence, the kid centric question of the ages comes to the fore. Why exactly do we let adults rule us and the world?

The mystery not solved here, the comedy continues and the necessity of securing the disruptor escalates under the same eclectic formula. In keeping, the Christopher Boncimino cinematography turns the twists, turns and the familiar artifacts of a middle school into a small-scale, self contained search for the Ark of the Covenant.

So by the open ended finale, not only are we looking for more laughs – our interest is peaked. We really want to see what new adventures these kids will take on. 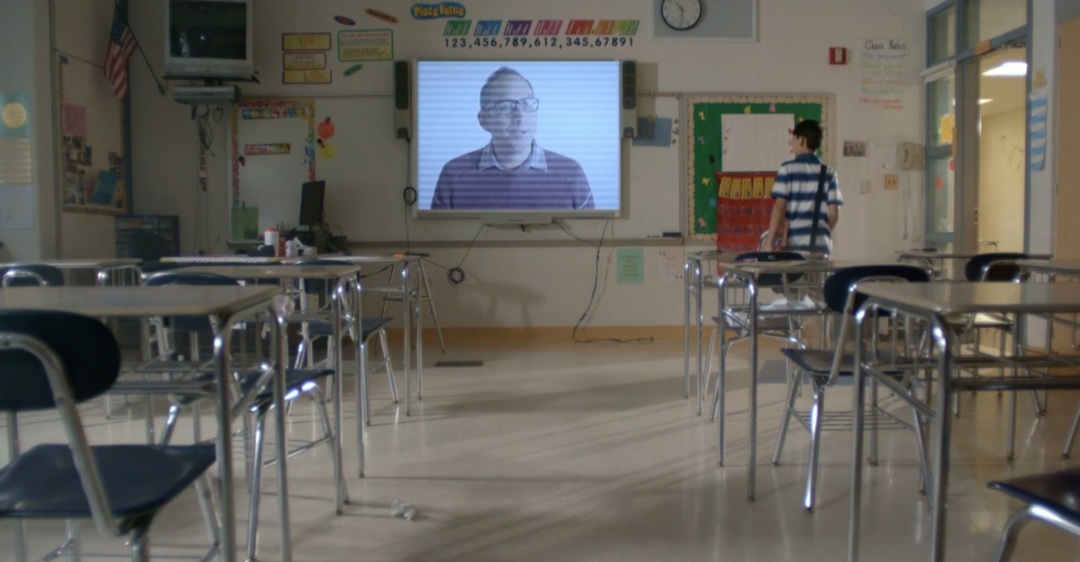 Twelve year old Arthur (Eric Ronen) gets a message from the future, and it comes from the older version of himself (Jimmy Loram). His four