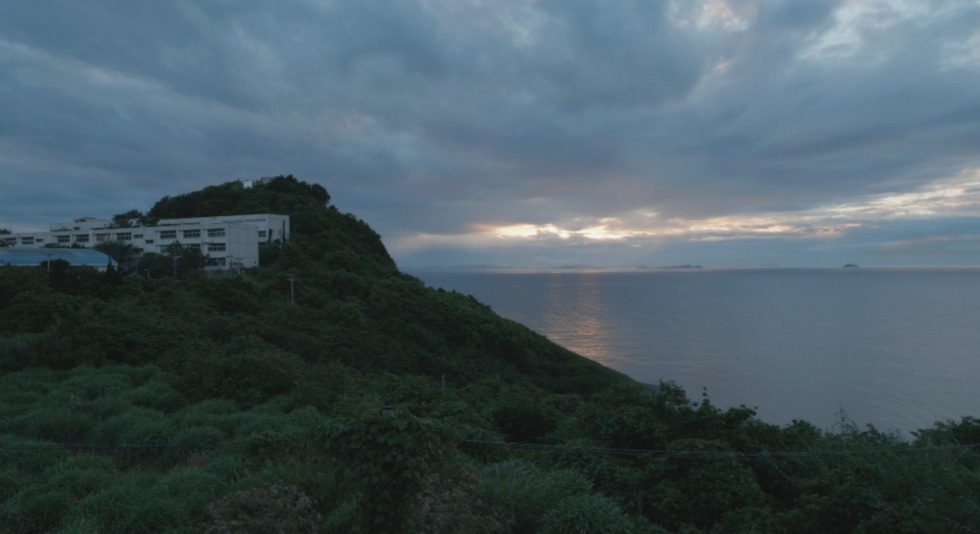 “Nature doesn’t judge. It solely exists. Whatever happens, it does with all its might.” The words open Andrea Pellerani’s documentary film, Dreaming an Island ある島を想うこと. In this case, nature’s will has imposed solitude on Ikeshima Island, and the impetus was the closing of the coal mines that once populated this small land mass off the coast of Japan. Those very few remaining carry the burden. But nature isn’t the only powerful force in the world, and the 76 minute feature proves that human might – can’t be defeated so easily either.

The exterior island shoot by Amanda Caprara and Pellerani opens in silence and feels like a nightmare is about to come upon us. Against the backdrop of a depopulated city, the abandoned buildings stand in disrepair and scream that structural demise is imminent.

Of course, nature is having its say too. Shrubbery climbing the walls, pervading the interiors and making the streets and parks unkempt, a total takeover is at the mercy of nature’s patient time table. At the same time, a plodding score with an all encompassing and mournful female vocal conveys the inevitability.

She doesn’t let up either as we see the first among the remnants of humanity. The island tour guide’s aimless stroll seems to yearn for what was probably a serious bustle, and all the ground that the cinematography exposes helps reveal just how big the exodus was.

The background makes its case too. The setting is perfectly still, and only the sound of the occasional crow tells us that we are not looking at a lonely old painting on the wall of a hotel room.

The old man then begins our tour. He shows us the worker residences, and laments the proud purpose they once served. He’s one of the 100 people remaining, and a small, steady stream of tourist provides a limited economy. The owners of general store and the island’s only restaurant are among those who subsist on the meager traffic, but lonely, surreal enclosure isn’t all that is evoked.

The small contingent seems pretty complacent. But it’s the restaurant owner who puts actual words to the feeling when a visitor asks, “how do you live?”

“Normally,” she says with a smile.

She has her modest little set up, her cats make her happy, there’s often different people to meet, and her daughter is contently by her side. In other words, the 60ish matriarch feels no reason to make excuses for a life many would find unusual.

Like the rest of the islanders, the inhabitants aren’t really trying to make sense of a life they didn’t seek. Instead, they accept their surroundings and make do.

The kids fall into line too. The dozen or so kids go to school, smile and laugh just like any other kid and don’t have any concerns about what they are missing.

The same goes for the teachers. Despite the oddness of a school that is 99% unoccupied, they use their professional skills and dedication to fulfill their roles.

All told, the fact that no character in the film ever explains why they have stayed really makes the point. So yes, the loss of a way of life can’t be overlooked but people adapt. No problem, score one for human perseverance, and the outgoing music taking a much more upbeat tone, we understand that Dreaming an Island is possible – no matter your situation or location.

“Nature doesn’t judge. It solely exists. Whatever happens, it does with all its might.” The words open Andrea Pellerani’s documentary film, Dreaming an Island ある島を想うこと.