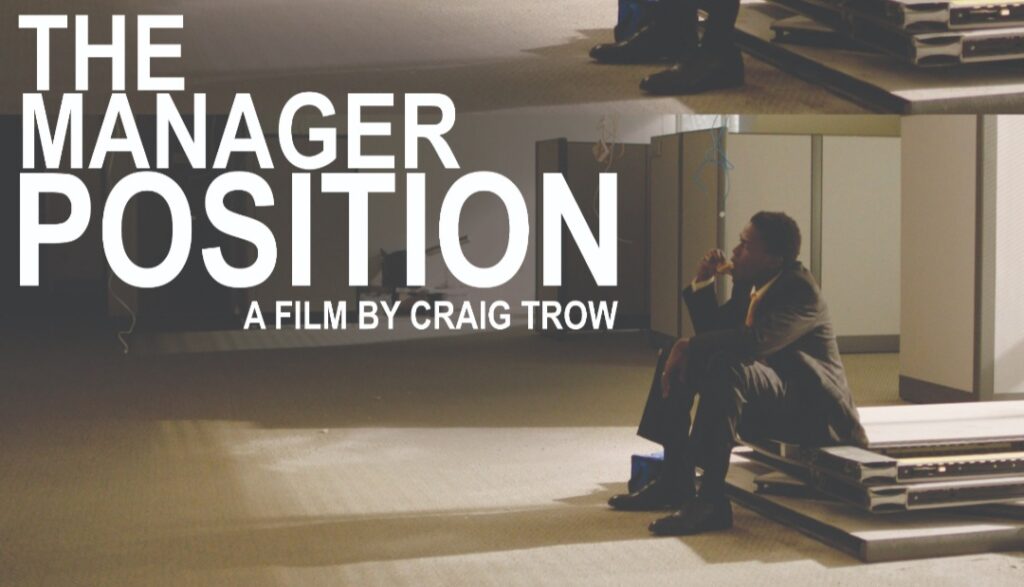 Want to see a film that speaks to a situation so many of us have been in? Craig Trow’s The Manager Position is so quickly relatable that you might pinch yourself to believe you are seeing your workplace, your co-workers, and your work experience. There’s comedy up front with a subtle punch behind it.

Philip (Curtiss Cook Jr.) has been working at a low-level office job in a typical stark white (in more than one sense) American business office. We see him sitting alone, writing self-confidence notes on varicolored Post-Its, which he then crumples up and throws into the trash. He pushes furniture around empty rooms. He gazes at a door with a sign that says ‘Manager’. At home, his wife Liz (Karina Willis) comforts him at the end of the day with food, wine, and questions about how he spent his workday. Philip murmurs routine answers and everything seems okay. Yet, the office he works in seems awfully bare – devoid even of other workers much of the time. And what exactly does he do at his job?

One day, Philip sneaks into the empty manager’s office and stretches out in the chair behind the desk. In walks a young man named TJ. He’s a new employee and thinks Philip is the manager. He begins to pitch Philip about his project ideas. Philip immediately falls into the role and shows TJ around.

But is this what’s really happening? It may take more than one viewing to notice the clues. Philip’s reality is the economic mess created by the recent pandemic, in which so many businesses have shut down. Philip has to maintain a façade of ‘everything’s okay’ for his pregnant wife, although she does notice some inconsistencies in his accounts of what’s supposedly going on at work. For Philip, even a Walter Mitty fantasy about being the manager ends up reflecting real-world barriers that can’t be avoided.

With the same gentle, humorous tone that Liz uses to nudge her husband, Trow (who both wrote and directed) comments on how difficult it is to move up in the work world, or even hold on to a grunt job, especially for people of color. There’s a sense of ‘you’re dammed if you do and dammed if you don’t’ – but there’s no bitterness here. The fantasy that Philip creates contains the core of empowerment for him if he can channel it into a future. It won’t be easy.

Cook is perfectly cast as Philip. He’s instantly loveable. We can sense the integrity and the dreams within him, as well as his difficulty at transcending his default niceness. Willis compliments him in their scenes together, projecting love and sympathy as well as concern. Jackie Hoffman is funny in a brief bit as a self-deprecating on-the-job-assertive secretary, and Charlie McElveen is convincingly slimy as the go-getter TJ.

Owen Hamilton’s cinematography stays discreet as it explores and exposes the whiteness, barrenness, and downright sterility of business offices. Music director Greg Patillo provides a soundtrack of sprightly soul music (including the Pointer Sisters) that keeps the film’s mood upbeat.

The fifteen-odd minutes of The Manager Position goes by almost too fast. You’re left wanting to know more about what will happen to Philip and Liz. Certainly, with a film like this, Craig Trow should be someone we will be getting to see more of in the future. 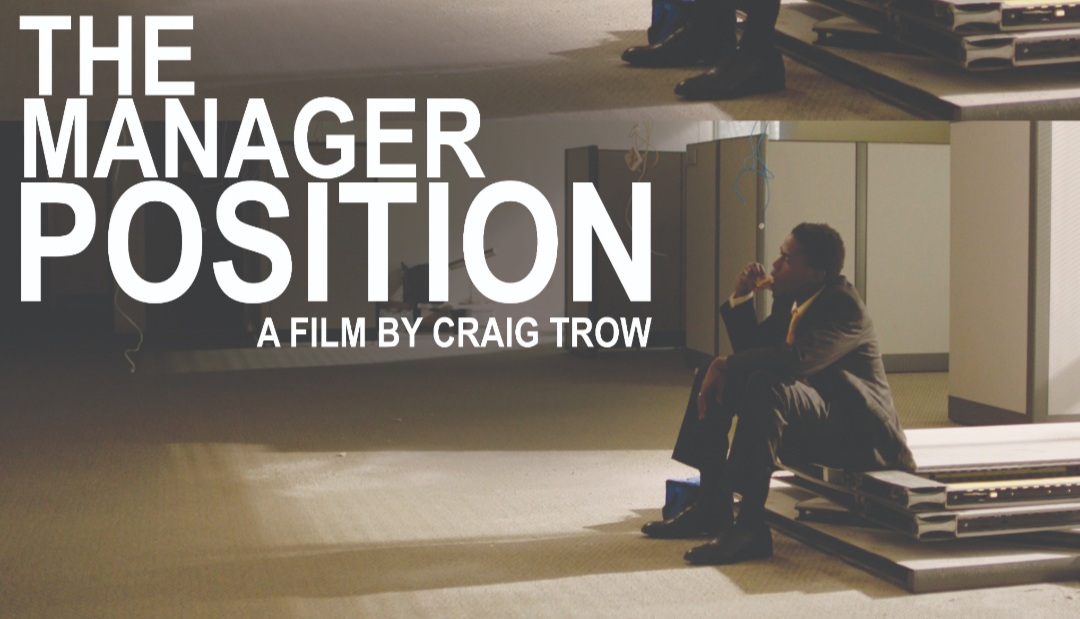 Want to see a film that speaks to a situation so many of us have been in? Craig Trow’s The Manager Position is so quickly