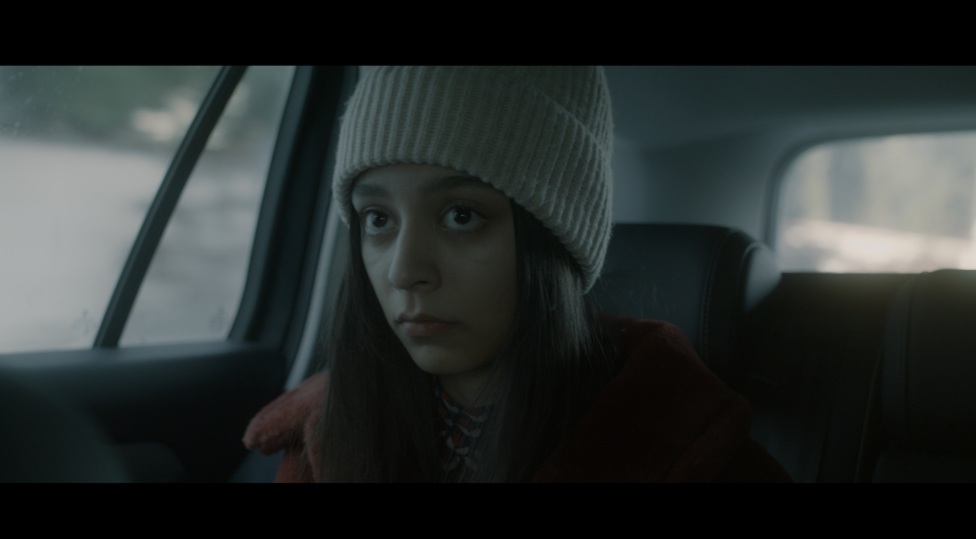 THE DEPORTATION OF A MODEL CITIZEN

In The Deportation of a Model Citizen, a young girl in Denmark faces deportation back to Syria. Torture and/or execution awaiting, the stakes are never absent and make this movie almost impossible to endure. But if you are a human being, Jacob Pilgaard’s 23 minute short must be watched, and not just because of all the innocents affected. This film is also about the rest of us – especially if you have separated yourself from the ongoing atrocity.

Still, the film begins by setting us at ease. Inside a typical dwelling, kids are playing a board game and the camera takes us around the interior where we see the pictures that make this house a home. As almost could be expected, a knock on the door unsettles the domesticity.

The knock gets more determined, and coming from the police, the uncertainty is clarified. They are here to pick up Aida (Thalita Beltrão Sørensen) and take her to the airport.

A prelude to later deportation, Lasse (Joey Moe) has his orders and is simply in the business of following them. The overcast day that Kristian Arbs accentuates with his cinematography, frames the officers mindset. A color film, the presentation feels very black and white, and his all or nothing manner, is how the antagonist drives the drama forward.

So at the outset, Moe comes across as pleasant and evokes no distress as he pleads his intermediary position as a faithful civil servant. No need for it to be personal, he’s certain that Kirsten (Tine Gotthelf) should facilitate Aida’s unavoidable path.

That is until the business becomes personal. Kristen questions Lasse’s soulless role, and his character is revealed in the ensuing standoff by the actors. Moe brings such a threatening stance that Gotthelf actually looks like she is standing down the full force of his authoritarian nature.

In contrast, Aida diffuses the situation and lets everyone off the hook by resigning herself to her fate. “It’s ok,” she intervenes.

Devoid of emotion, Sørensen extols a defense mechanism in full gear and her slow glide and colorless complexion has a startling effect. She’s a ghost, and the way she applies touch to the world around her, implies that this apparition is taking a last look.

Nonetheless, the story continues inside the patrol car and life returns to normal for the two officers. Lasse and Marcel (Mads Hjulmand) digress into typical conversation, and despite the everyday aggravations, all is good in the Denmark they live in.

Marcel, on the other hand, is not immune to humanity. He can’t ignore Aida’s distress and permits a stop to say goodbye to a friend. Moe further reveals himself with a shrug and sigh that scoffs at his partner’s weak sentimentality.

Hjulmand’s quiet resolve settles the matter, though. But this young girl has still been marked for extinction and the weight of watching is almost too hard to endure. Aida actually handles it better than us, and Sørensen’s reaction is more akin to a teenage girl who is very passively defying her father.

The model demeanor draws Marcel in further, and he can’t help verbalize the impact of their work. “33 of 59 cases of deported Syrian Immigrants were sentenced to death or torture. Kids as young as 11,” he reports from his phone

In response, Lasse falls back on the chain of command and cavalierly opts to hide behind his badge. But there’s something the officer did not take into account.

In saying goodbye to her friend and the school principal, Aida begins to lose her brave stoicism, and Sørensen really selling it, he finally sees her as a human being. So as Aida slowly breaks, Lasse must make a journey to freedom too, and the score is almost asking him to go in search of his humanity.

Really hard to watch now, we can easily see ourselves, and her touch again reiterating an outer worldly transition, the hope for a happy ending becomes personal. But either way, the film can’t change the stories that have already been written. As for those that haven’t been fully told, the film implores that we be model citizens, because the lives of people like Aida aren’t the only ones at stake.

THE DEPORTATION OF A MODEL CITIZEN

In The Deportation of a Model Citizen, a young girl in Denmark faces deportation back to Syria. Torture and/or execution awaiting, the stakes are never