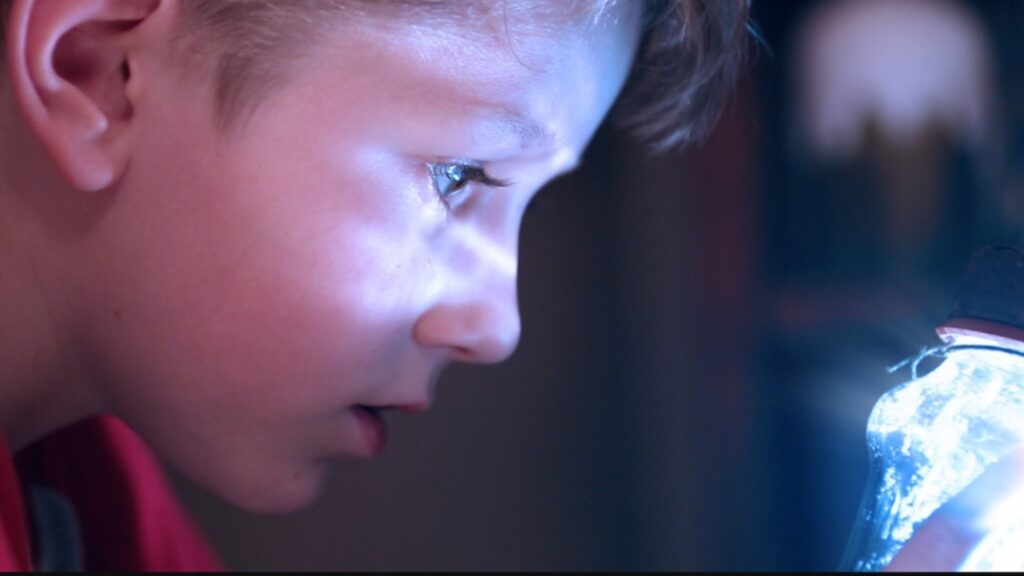 James (Charlie Tacker) has lost his mom, and Ian (Dan Mauro) has lost his wife. In short, the light has gone out in their lives. Well, life goes on – at least it does for everyone else. But it would be nice to think there are forces unseen that can take us out of the darkness. Why not, asks writer/director Gary Fierro. So Fierro has given us The Firefly Jar, and these guardians are known as light workers because hope can go a long way. Only 29 minutes of belief, the short fosters strength, and maybe when your number comes due, a little cinematic recall might just provide enough illumination to get you through.

That said, the light workers have been around for thousands of years, according to the opening, and they act as a guide to heal humankind in times of strife and sorrow. Entering the funeral home to a descending melody by José Monzón, father, son and grandmother (Edie Hofstatter) look like they’ve been sucked inside a blackhole, and there’s no parallel universe to accept them on the other side.

Three months later, the melody still lingers, and only the camera is needed to tell the story. All three remain distraught, but dad is on a different level. Mauro fritters on the edge of rage and despair, and unable to cope, fatherhood has become a burden he can no longer endure. So he’s sent his son to live with grandma.

In this, Hofstatter walks a much better tightrope. The actress grieves, but her empathetic performance doesn’t elevate her pain above that of James.

Nonetheless, the boy has in a sense, lost both parents. Thus, the young actor is given the reins, and it’s his job to continue expressing the despair. In school, at home, life going on around him, the actor does a magical job of not tipping his hand. Neutral in all his expressions, Tacker’s delivery goes beyond his years, and amounts to futile search for answers without knowing what the question is.

The Monzón score continues in the same vein, and the vortex the tune signifies shows no signs of letting up. That is until the light keepers are summoned, and specs of light and dust are the subtle salvo.

Pulling in by the subtlety, the sentiment that the Dave Sikora cinematography is after gets a bit deeper. The suburban landscape sets a tone that implies the setting is sleepy enough to provide cover for a lightworker or two. In turn, the minor sparkles give way to a spherical bluish orb, and something is afoot for sure. The mystery then takes human form.

Off the beaten path, The Great Sampson (Reno Venturi) resides and has his wooded outdoor encampment hailing from another time. A traveling magician, he certainly is, and Venturi definitely conjures the character. Disheveled in appearance, the actor’s resigned submission to his off-kilter plight brings us amusingly back to a way of a life-long past.

So James is taken in, and Sampson has us believing. The melody, amongst the splashes of light, has also taken an upturn and now reflects wonder and possibility.

The gift of a magic jar bodes well too, and so does the single wish that goes with it, according to The Great. The capture of an opaque firefly then has everything falling right into place.

Unfortunately, things must get worse before they can get better. Not to worry, the magic hasn’t disappeared, and even without the industrial light of George Lucas, the special effects by Fierro essentially tell the rest of the story.

The jar bursts, and the real light show begins. Reflected in his glare, the music becomes open-ended and the expanse of James’ new vision collapses back into the transparent container.

Anything seems possible. All James must do is release, and we soon see the enlightened insect is up to the task. The manufactured little creature emerges and its intricate design implies that it knows what to do. The enhanced buzz we hear on the flyby reinforced the point, and again, light is the measure.

Now the specs of dust cascade like a kaleidoscope, and the music has us reach a crescendo. The rest is just window dressing, and while The Great Sampson will never actually light our lives, the film assures we can always hope. 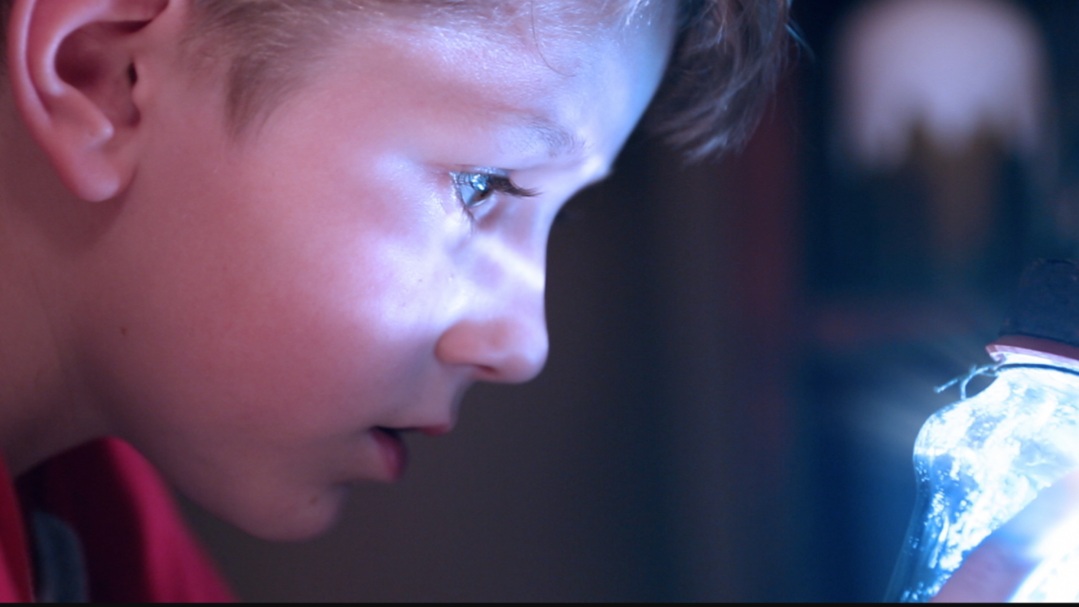