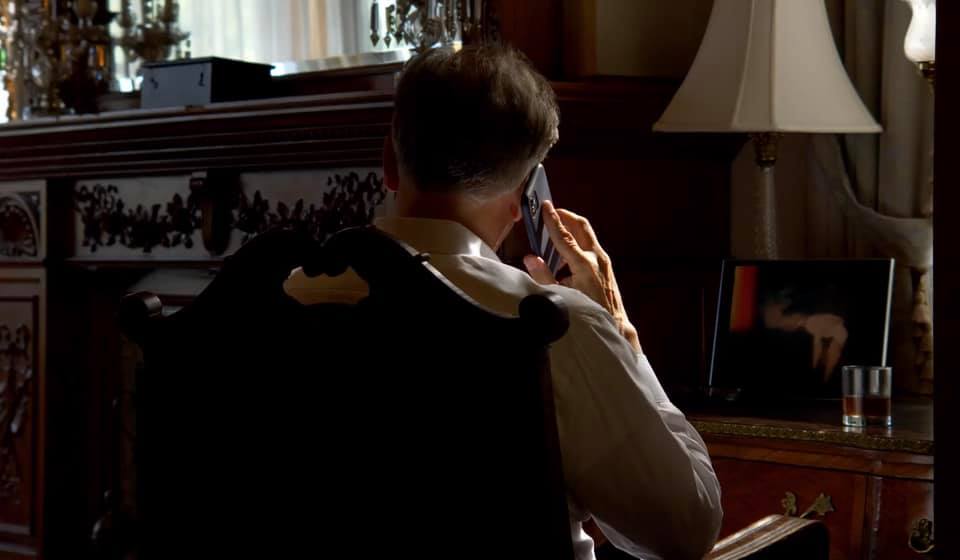 Robert J. Morgalo tackles making his first film during the global pandemic of COVID19. He is the writer, director, producer and actor (Senator Ramirez) of his short film that asks the important question – is there a price that can be put on a human life – and who gets to choose who lives or dies?

As the world grapples with the novel coronavirus, Morgalo brings the clash of economic interests and public health into stark focus in his short film THE DISPENSABLE.

The opening immediately draws you into what feels like a time gone by. A woman’s hand starts to play a record on a phonograph which captures music from yesteryear. Even the old house seems to confirm that we’ve gone back in time.

The homeowner – Mr. Stevenson (Richard Bertisch) – is considered to be one of the most influential financial consultants in the country. Shots of his Presidential Medal of Freedom along with picture frames of him alongside images of President Trump and Vice President Pence are also present in the home.

The film takes the feeling of the past, and brings it into the present, with a shot of a modern day car driving amidst these affluent homes to a fateful destination. The car pulls through the opulent gates where the housekeeper (Maritza Vives) and the gardener (Alberto Suarez) greet Mr. Goode (Jonathan Arons) who has come to conduct an important interview with Stevenson.

“You’re not Davis” Stevenson says upon meeting Goode. “Davis took ill and asked me to fill in for him.” The maid enters and asks if they would like something to drink.

The heart of the story reveals itself during the interview about opening up the economy too soon after the initial lockdown – causing hundreds of thousands of deaths. Goode asks “what about the other people?” Stevenson states “the greater good must always come first.” “But at what price? Are they really dispensable?” asks Goode. Stevenson’s answer – “Yes”.

Without giving anything away, tables are turned and Goode gives new insight to Stevenson about who is truly dispensable.

The message this filmmaker wants to convey is powerful but the writing and acting isn’t strong enough to support it. The scene between the housekeeper and the gardener where she states she missed her bus and needs a ride doesn’t move the story forward and feels misplaced in the film. Goode asks “where would you like me to set up?” Stevenson replies “wherever you think is best.” When Goode picks the spot in the room, Stevenson immediately changes it. It felt counterproductive to the scene.

Arons and Morgalo give strong performances while Bertisch felt on top of the emotion/lines rather than being connected to it.

Morgalo’s film is deeply personal as it was born from a statement he read in the news indicating that it was perfectly acceptable to lose a few hundred thousand lives in order to save the economy. This premise was deeply troubling and personal to him as his mother-in-law had recently passed away from the coronavirus.

His first film is a testament to how beautiful a medium filmmaking is – especially when there is a powerful message to convey.

Morgalo opens the film with the phrase “One who oppresses the poor to increase his wealth and one who gives gifts to the rich – both come to poverty.” – Proverbs 22:16

In these trying times, he reminds us all the importance of one single life.

Robert J. Morgalo tackles making his first film during the global pandemic of COVID19. He is the writer, director, producer and actor (Senator Ramirez) of