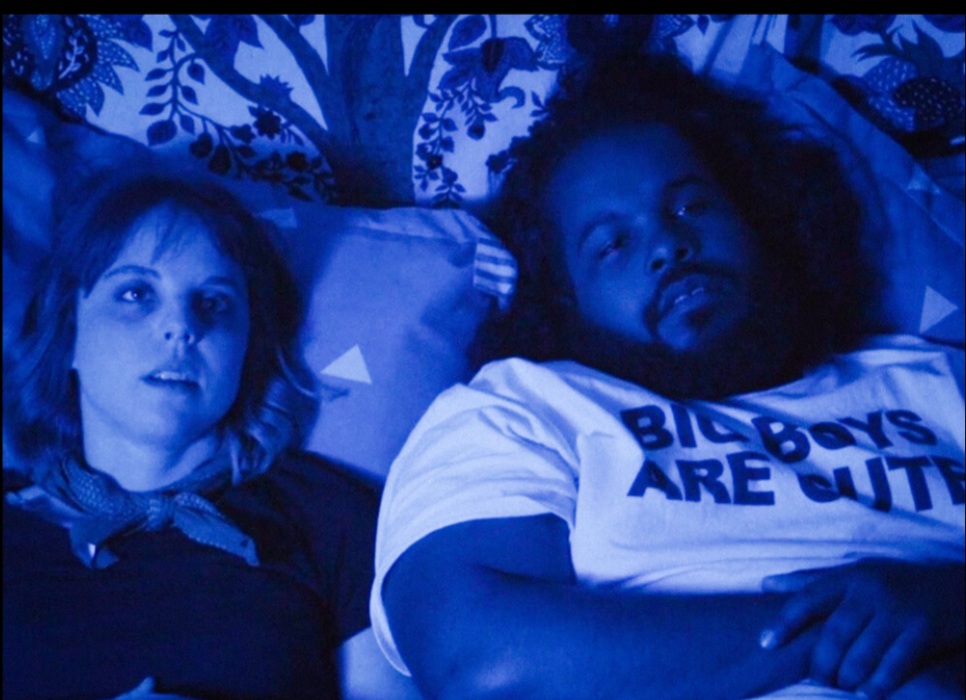 The film is listed as a comedy – yet it explores themes and characteristics that one might find troubling to the soul.

The first scene opens on a brief flash of Jeff standing over Syl’s body with a knife grasped tightly between his hands and raised above his head. As sweat drips down his brow, Syl yells for him to “just do it already!” as she lays motionless and impatient on the ground below. In a moment’s time, viewers are quickly snapped out of the scene and placed into the past, precisely into the moment where Syl and Jeff first met.

It is here that we learn of their backgrounds and motives: Syl had agreed to meet Jeff after responding to a post he made on the dark web. This post was not a typical status update one might expect but rather, an advertisement that would jar any number of unsuspecting readers.

While in a corner booth at a café, the facts are revealed as they converse with one another: Jeff is a cannibal in search of his next partner (read: meal), and Syl is the woman who wants to fill this role. Their discussion is casual and nonchalant – which by itself is grounds for good comedy: the irony of blasé insanity – but as Syl expresses her reasoning of why she’d like to be his victim, the intended humor seems to rapidly vanish.

Syl explains that she has been suicidal for years, but has never been able to take her own life. This is where Jeff comes in. In one of her first lines, she lays out her desires plain and simple:

“I’m looking for a quick deal here. You give me what I want – kill me – and I give you what you want, a delicious Syl-mignon.”

At this point, the severity of Syl’s mental health is drastically clear to first-time viewers, which causes the film’s satirical angle to read as a bit off-putting.

Still, the plot resumes as though both mentalities are completely rational and unconcerning. Syl and Jeff begin to wander the streets of their town while having light conversations (many of which include multiple one-liner jokes from Jeff, revealing a playful side to their blossoming friendship). They are the “misfits of society,” and while they experience feelings of isolation on their own, they begin to find solace in each other.

These moments are tender and sweet – very Before Sunrise-esque – yet the pleasant and comical tone begins to digress once again as they enter a hardware store.

Here, they roam the isles in search of the “tools” Jeff will use on Syl, creating a visceral reaction amongst viewers as their fingers trace various blades and machines. While moving about, Syl apathetically discusses her past attempts at ending her life as Jeff offers a judgement-free ear. This dynamic continues for the remainder of the film, and as their relationship develops, so does the severity of what’s at stake.

From a production standpoint, the film is well done. There are a few odd elements of mise-en-scene that seemed a little out of place (like a homemade video tape that plays repeatedly on Jeff’s TV, seemingly untied to any part of this narrative), but still, the framing is done in a way that exemplifies a level of aesthetic professionalism.

The cast does a good job as well. While some of their characteristics are a bit outlandish, both Berman and Belliard did a great job of portraying lonesome outsiders, and their hesitant vulnerability was relatable and endearing.

Yet, the plotline could use some tweaking. Cannibalism and grave issues of mental health mix like oil and water. While the passion and effort of co-writers Ricardo Lorenzo and Alex Stone was undoubtedly admirable, each character could have benefited from having their stories stand alone, separate from one another.

Jeff and Syl discuss some very heavy topics related to suicide and depression, and a lot of these conversations were thoughtful, heartfelt and honest. Unfortunately though, the power and importance of their words may not resonate with audiences due to the omnipresent distraction of the cannibalistic plotline.

Still, many will respect the filmmaker’s attempt in approaching this subject in a radically new way. More than anything, An Unlikely Story is unapologetically original, and it is sure to give its viewers an experience that they’ve never seen before.