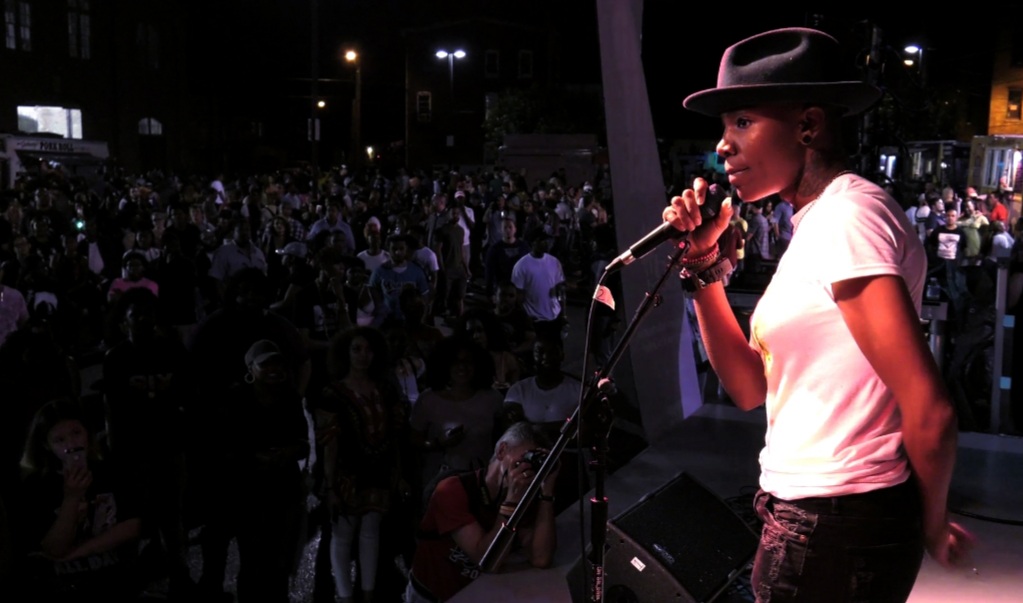 Two Trentons – An American City Speaks begins with a gun shootout that took place at the annual Art all Night Festival on June 17, 2018. The night time chaos, police officers arresting people of color and the mayor trying to calm the city is all too familiar. Thus, the drama seems ready to reveal a city that could easily succumb without healing all the societal cracks below. But the 90 minute Brad Mays documentary chooses a more human interest approach, and without a strong dramatic narrative, the film value doesn’t quite cut it.

So thinking a delve into the depths is about to begin, the film goes on the upswing with an introduction to the Trenton Arts Community ensues. Coffee shops and Cool jazz people, Trenton definitely has got a vibe.

The characters talk a good game and so does their sound, but there’s nothing that really grabs hold. That is until there’s some context.

Mindy Thompson Fullilove is an author/psychiatrist who offers insight about a public policy that yielded cultural decimation. “In all the neighborhoods I visited that experienced urban renewal there were jazz clubs, and the jazz clubs for the most part were destroyed.”

Affecting 995 cities across the nation, according to the good doctor, and of course, Trenton was one. Now, that stings, and so does the rap duo from, A Mankind Destination. “Trenton, that’s where all the violence was. It wasn’t until I became more socially aware that I was missing a way bigger picture. I came to that through the arts and grew as a person,” revealed the lead singer.

Fullilove then ‘brings it back around’ and returns us to the South Bronx in the 70s. A NYC policy called “Planned Shrinkage” withdrew fire stations from black communities and neighborhoods literally burned out of existence. So the young people living this anguish found that rhythm and blues was inadequate to express their pain. “They invented a new art form. They invented rap,” Fullilove revealed.

A mind-blowing tie in but the rappers and other artists return and belabor the point. So while it’s certainly nice to see their contributions to the Trenton community, the discourse mostly just adds running time.

Still, the movie seems to get back on track as the inseparable issues of incarceration and mental illness are raised. Of course, the tandem goes hand in hand with racial injustice, and the tragic triumvirate is reiterated by the film.

In turn, we are introduced to both victims and community initiatives that are making a difference. The players tell their stories, and while they are to be acknowledged and commended, the droning feels akin to an over indulgence.

The film reengages again with a discussion of the wealth gap and how the destruction of the middle class decimates across the board. The upper class expanding their political power base, according to Brandon Castro, Executive Director of the Work Environment Council, they avoid paying taxes, and the shrunken middle class cannot pick up the slack. “When this happens municipalities and states tend to go broke,” lamented Castro.

The spiral down is inevitable, and yes Two Trentons gives us wonderful stories of the people trying to make a difference. But the best parts of the two Trenton’s are historical and informational.

The documentary needs more of that and would be better served by exposing the politicians, business people and others who benefit from the two tiered set up.

Instead, the film almost feel like it was made by the city of Trenton and while Two Trentons wasn’t, an agenda unintentionally arises. Let’s bring to light our struggles but look at all these wonderful people who care and are striving to fix our city.

No doubt they are but without a more inquisitive story arc, the film falls to satisfy in the genre as a memorable documentary.

Two Trentons – An American City Speaks begins with a gun shootout that took place at the annual Art all Night Festival on June 17,