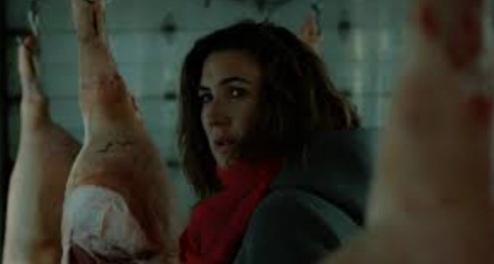 Given the complexity of human life, abortion is a divisive issue that will probably always have life. The sweeping abortion law in Texas and the exploding national conversation speaks well to the split. So the entrance of a 20 minute Oscar-Qualifying Short Film called Frimas is perfectly timed and will do its part to keep the dialogue going.

Written and directed by Oscar Nominee Marianne Farley, the film opens on the wrong side of town. The overcast pale that the wintery desolation and the Benoit Beaulieu cinematography casts feels like life here was carved out long ago. There is background noise but the dominating sound comes off the heels of Kara’s (Karine Gonthier-Hyndman) sensible boots. In other words, the pregnant woman is all alone in not only the choice but a potentially perilous course of action.

So a backroom appears to be in wait. Poor Kara should be so lucky and the terror that Gonthier-Hyndman quietly emotes with her quickened pace and paranoid glances seems to speak first to the possible legal consequences.

The sentiment is thus reinforced in the background. Clenched fists a pumping in the political posters that line the baron walls, a fascist element has taken flower in this democracy.

Worse yet, when the means of Kara’s choice emerges, the danger shifts. Pulling up coldly in a mid-sized tractor trailer, Benji (Kent McQuaid) doesn’t quite offer the reassurance of a receptionist in a doctor’s office. Thus, the below board demeanor and exploitive opportunism that McQuaid projects strongly implies that there’s no guarantee that the patient will survive the day.

Of course, the read on Gonthier-Hyndman’s face has the reality setting in, and the inevitable urge to hesitate comes across clearly. She also conveys a look of disbelief, which seems to yearn for the mere inconvenience of what was once only a spirited debate.

Nonetheless, Kara decides to follow through and abortion on wheels is now the vehicle of her choice. The thought is pretty horrifying and then the writer/director gives us the perfect imagery to relay the state of women’s rights in this theater.

The truck is hauling steer, and hanging from hooks, the slabs make Kara realize that she is now a sub species to her male counterparts. No choice, she takes the next step and in actually navigating past the carcasses, her new natural habitat is revealed.

The racing score of Frannie Holder then rubs it in, because in this jungle, Kara and her woman-kind are the prey. Nonetheless, the immediate consequence comes into focus in the makeshift operation room and the person administering the procedure. Dre Hubert (Chantal Baril) probably came in with a deep committment to the cause. But the perilous nature of the work wears heavily, and Baril shows the gravity with her performance.

The character is curt, methodical, and probably wishing she could renege on the idealism that got her into this, her bed side manner has been replaced by fears of ending up in prison.

That said, we must see the long fist of the law and apparently illegal search and seizure is no longer among the rights this society can count on. So we are forced to confront that when a government completely legislates away the complexity of an issue like abortion, how far behind are our other basic rights.

At the same time, the misplaced and determined righteousness of the two military police officers (Christian Jadah and Alex Bisping) chills as cold as the Frimas or frost that this society is enduring. Even so, abortion does find a near consensus on one aspect of the issue. Only eight percent of Americans believe that abortion should be illegal in all cases. That said, it’s safe to assume that one area of agreement occurs in cases of rape. Well, the faction is simply acknowledging that the issue of abortion is complicated.

The film’s revelation demonstrates the limitlessness of the human inexperience. So too are the reasons why someone would choose abortion, and the story implores that there’s no way you can legislate or stand in judgement of all the many possibilities.

Given the complexity of human life, abortion is a divisive issue that will probably always have life. The sweeping abortion law in Texas and the