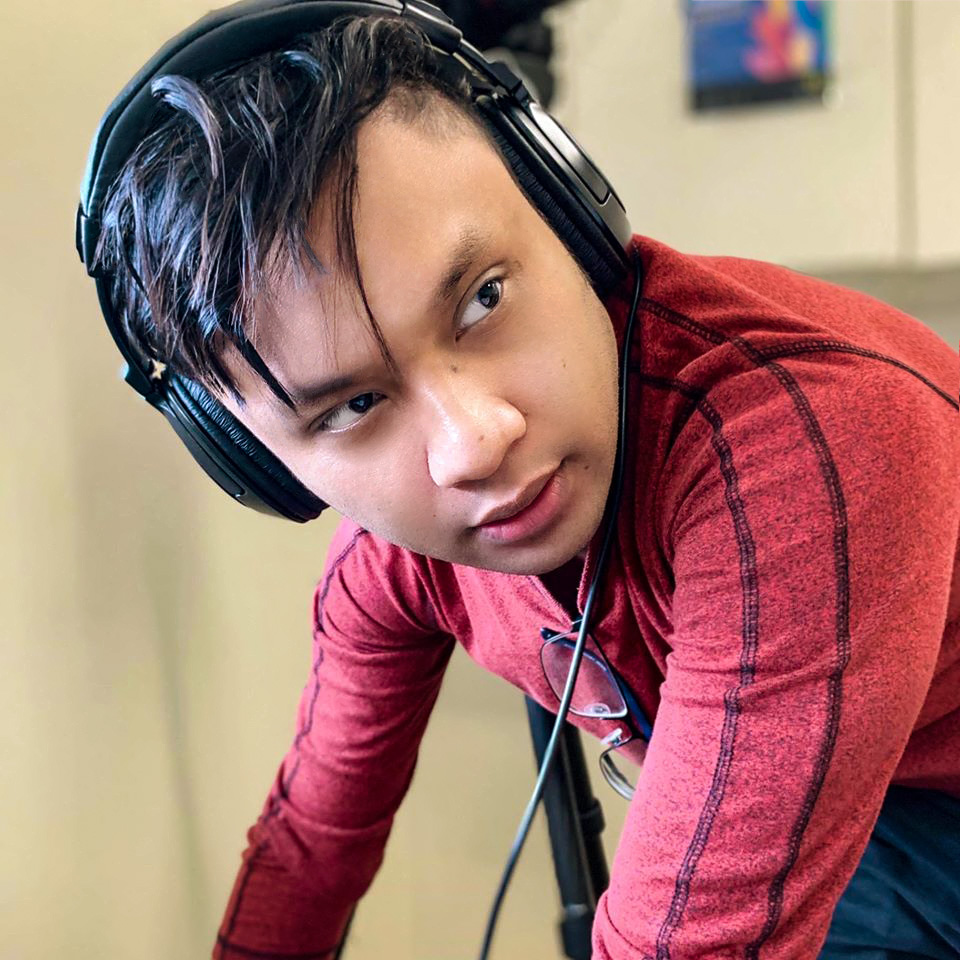 How did your Filipino upbringing impact your creative mindset and how did integrating Australian culture expand the artist in you?

Any origin story to do with immigration finds itself couched in otherness. When I began my life in Australia, I was little more than a toddler, but still I was sentient enough to know where I fit in the whole paradigm. I was an interloper, an outsider, and so I brought with me an outsider’s perspective on things. And I have to say it’s not a bad mindset to have. Being too close to something breeds romanticism or contempt or both, but a measured distance allows for a kind of spectatorship that is essential to truth-telling I think.

How old were you when you got your first camera and how did you begin developing a proficiency for filmmaking?

Somewhere in the middle years of high school. It was a digicam my parents had bought duty free. And appreciated though it was, I now think I would have been better served with a set of pencils and construction paper. Getting caught up in lenses and sprockets and filters is all well and good, but at that age I really should have been honing my visual planning skills: storyboarding, blue prints, beat sheets and so on. Recently there was an earthquake along Australia’s south east, and while I was fortunate enough to have been outside the fault lines when it happened, I was overcome with worry and dread over loved-ones situated in affected zones. But now that the worst of it has past, I suddenly find myself obsessing over ways in which to shoot an earthquake scene. Should one spend a small fortune to rig a hydraulic set so that it trembles on command? Or is it enough to forgo storyboarding and just shake a camera whilst having the performers act out the loss of balance that comes of being in an earthquake? Strange how the mind works.

After getting a Bachelor’s degree in Media & Communications, why did you pursue a Masters in Government and International Relations?

The degree itself diversifies my qualifications but the knowledge obtained is precious in a whole other way. I like to come into projects not necessarily well informed but more appreciative of the concepts germane to said project. I’ve just edited two documentaries – one a sobering look at the Australian-Jewish community and how certain Jewish proponents are ostracised for their support of Palestine; the other an advocacy piece centring on three asylum-seekers ostensibly trapped in Indonesia as a result of cruel deterrent policies. For both these projects, a familiarity with the field gave me better footing of the material.

How does the educational discipline impact your process as a filmmaker?

The knowledge is boundless, but the discipline itself? Not so much. If anything, discipline presents a hindrance. Discipline is clarity, and a rigidity in vision inhibits adaptation. One needs to adapt to the terrain, to be in flow with it, and not battle with it so that it fits the structures of one’s discipline. Over the years it’s been said that I need to take a “chill pill”, and since having made a film about Buddhism, one could say that “chill” is now my default state. My life and my work are better for it, and people who know me have noticed. Let’s shed some of that discipline.

Whatever Queenin’ is is not for me to say as my involvement started on the animation side. For a fuller answer, I turn to the words of my collaborators – a coterie of fierce female talents. Bindi Barz, the rap artist, has said, “The song is about a quintessential bad bitch who loves to party and have a good time but also has her shit together and is making her own money and living her life to the fullest.” Sandra O’Connor, the very talented director of the music video, exercised restraint and allowed the central performer, Olivia Porter, full control over her wardrobe. Of her costume selection, Olivia has said, “it was a random choice – mid lockdown, partying alone – but I sort of viewed it as waking up from a party in a random place.”

Queenin‘ mixes animation over a real person. How does the animation come together when it’s based on the movement of a real person and how does it affect your direction?

Much like in live action filmmaking, the direction of the main subject is not too malleable in post. With animation, you can drastically alter the shape and contours and colours every which way, which is certainly what I did with the background art for Queenin’. But with the proportions of the main subject – in our case, the dancer – you get what you get. So my animation was bound to this constancy. But owing to the talent of the director, I ended up with a lot to work with.

Where did your interest in animation come from and how does animation allow you to further express yourself through filmmaking?

My attraction lies in story foremost, and everything else exists in service to that story. In my triumvirate of rotoscoped works, I felt animation was the best means of expression. Everything is Upstream and Queenin’ dealt with dreamscape, and I don’t know about you but on the rare occasions when I am able to recall my dreams, the resultant aesthetic is otherworldly. Real yet not real. A surreal middle-ground which is best rendered through the real-but-not-real aesthetic of rotoscope animation. With Shelter, animation was a means to expressing the unity and one-ness of performance artists throughout the globe. Whatever means of expression best suits a story is a means of expression I will tackle. Most people I know work off a singular image. I would like to try that approach one time.

During the COVID-19 lockdowns, you had performance artists from around the world expressing the emotion of isolation through dance. What does dance mean to you personally, and what is your message in Shelter: A Dance Film?

That there is connectedness that needs to be acknowledged, and that even with the most restrictive of circumstances, that connectedness prevails. Shelter opens with the dancer from Australia. What follows is our filmic attempt, vague though it may have been, to map the connectedness of her movements to others – not necessarily as being in flow from one country to the next, but more existing in rapt unison: Australia is New Zealand is Japan is Kazakhstan is Iran is Guatemala is Benin is the Ivory Coast is Canada is North Korea – yes, North Korea! And we animated these dances to make it feel as though they were all one dance as opposed to several dances edited together. I like to say It was remote direction at its most expansive and interconnected, and every step of the way I was mobilised by the words of dance artist Pina Bausch who I had just discovered last year. She famously said, “Choreography is expressing feelings – though every piece is different, they are all trying to get at certain things that are difficult to put into words.” From the outset, I knew what we wanted to put into words. That art cannot be stifled by isolation. With this mission made core, all 176 dancers set themselves the task of dancing to express isolation, and to unify this expression, I animated them. When you see the film, I hope you will agree that the one-ness holds firm.

You originally thought you could explore your message with 12 dancers. Why did the roster grow to 176 and how much depth does the expansion add to the story?

Initially I thought utilising only major countries would suffice. But as the work evolved, a more inclusive mandate was demanded. The film has its inciting incident in COVID, and all counties were effected by COVID. And that is yet another source from which we can all derive one-ness. John Donne famously opined “any man’s death diminishes me, because I am involved in mankind.” That’s COVID.

How well did you have to get to know and talk to the subjects, and once understanding them better, how did that impact your directing?

There were 176 dancers in total, I wish I could tell you I was friends with them all. But given the constraints, many of these encounters were streamlined. They came into my life, brightened it with their contributions, then left with the same abruptness with which they entered. So really, it didn’t take much to engineer some kind of understanding – our windows of interaction were small and conceptually our goals were easy. And though many of us are still in contact through social media, the connections are fleeting. It would be great to invite all 176 dancers over one night so we can all watch Star Wars together or something, but filmmaking is a very transient craft. Everyone moves onto other projects and I end up watching Star Wars alone.

How freeing was this process for the dancers?

I would like to say very. Though they did have to dance in a “sandbox” so to speak, and that sandbox was decidedly indoors. I had dancers ask if they could perform outside, and I had to disabuse them of that notion as there were themes to be considered. But within this sandbox, the artists were free to physicalise as they saw fit. Although one European dancer did bring a limbless mannequin into their choreography, and as oddly hypnotising as it was, it felt out of synch. There, I requested a reshoot sans mannequin. Similarly, Donovan Dorrance, the film’s extraordinary composer, was also left to his own devices and was given only the vaguest of references. When he was done, I edited the film around the already-finished score. So really, the process was freeing for all involved.

By the end of Shelter, what did you learn about yourself?

Every time a dancer takes to the stage, the embodiment of perfection on show exists by the grace of feet once bloodied, bones once bandaged, backs once broken. To give a piece of oneself is so primordial in their art, it must be the same for other artforms. There is an immutable transaction that we cannot deny, and to accept it is to know yourself on a deeper level.

What’s next for you in your career?

Let’s get through COVID first. Are you double vaxxed?

Take2IndieReview sits down with Director Martin Ponferrada. How did your Filipino upbringing impact your creative mindset and how did integrating Australian culture expand the artist