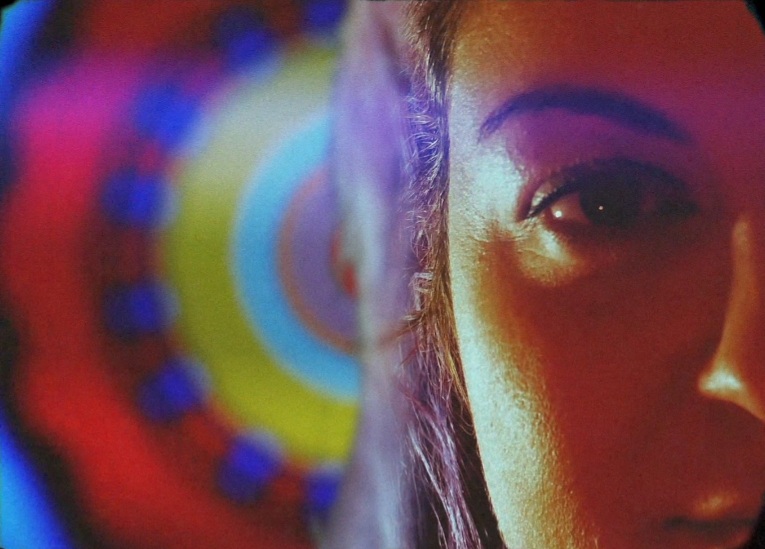 “Experimental film, experimental cinema, or avant-garde cinema is a mode of filmmaking that rigorously re-evaluates cinematic conventions and explores non-narrative forms or alternatives to traditional narratives or methods of working,” according to Film: A Critical Introduction by Maria Pramaggiore and Tom Wallis. Sorry, that’s just a nice way of saying that the movie isn’t going to make any sense, and the message – if any – resides deep inside the recesses of the filmmaker’s mind. Close-Up: An Odyssey is one those movies, and while the Nick Gatsby film frustrates the way it probably should, the 16 minute short is hard to take your eyes off of.

A song called, ‘House of a Thousand Corpses’ starts us on the journey we can’t look away from. Performed by James Booth and the Return, a punk riff by the Devil’s Rejects could probably reanimate the Ramones we’ve already lost. The 8mm exposure then goes heavy on the colorful psychedelics, and screams for the retro to be real.

A bong, some LSD and a little freebasing lets us know the journey won’t be impeded by too much reality either. So Lucy (Skye Armenta) is right in our face upon entrance, and she ain’t playin. On yet another spiritual journey, the free spirit reveals her revelation. “I sat in the dark of my bedroom trying to find some sort of purpose for this pointless existence of mine. Then I was blinded by a big burst of light. The clarity it gave me was unlike anything I had ever known. It shed light on all the bleak corners of my mind until an idea emerged, an epiphany – I had never been to Mars, and that had to change.”

Lucy has definitely come to the right place, and Armenta’s playful glee really sells the eclectic sentiment. Of course, she can’t do it alone. Lucy calls her dealer, “whose name shall remain anonymous,” she insists.

Portrayed by Gatsby, the drugs aren’t the only thing that make him out of this world. All the hippie talk, Anonymous is far from square and is just plain groovy to the perfect play of the director/writer/producer.

Cool can’t overcome his travails, though. In debt, Anonymous needs money and intends to rob a pharmacy. Even so, Lucy is down, and adding in some funky jazz beats to a series of offbeat visual and audio cues, we are too.

The shots all framed in closeup, the two lost souls don’t let the camera work go to waste, and play off each other nicely. “I have butterflies in my tummy,” Lucy beams.

A step slow, Anonymous misses the mark. “I tend to do that to women,” he confidently retorts. But Lucy is referring to the trip to Mars.

No feelings are hurt and the adventure continues. So does the (acid) trip, and a traverse between “infinity and beyond,” comes courtesy of Gatsby’s special effects and cinematographic work.

Only to find themselves back on Earth, Lucy’s gained wisdom could amount to a dumb downed version of 2001. Who knows? No need to look so deep because the eye, ear and amusement test is enough to sustain your enjoyment.

“Experimental film, experimental cinema, or avant-garde cinema is a mode of filmmaking that rigorously re-evaluates cinematic conventions and explores non-narrative forms or alternatives to traditional