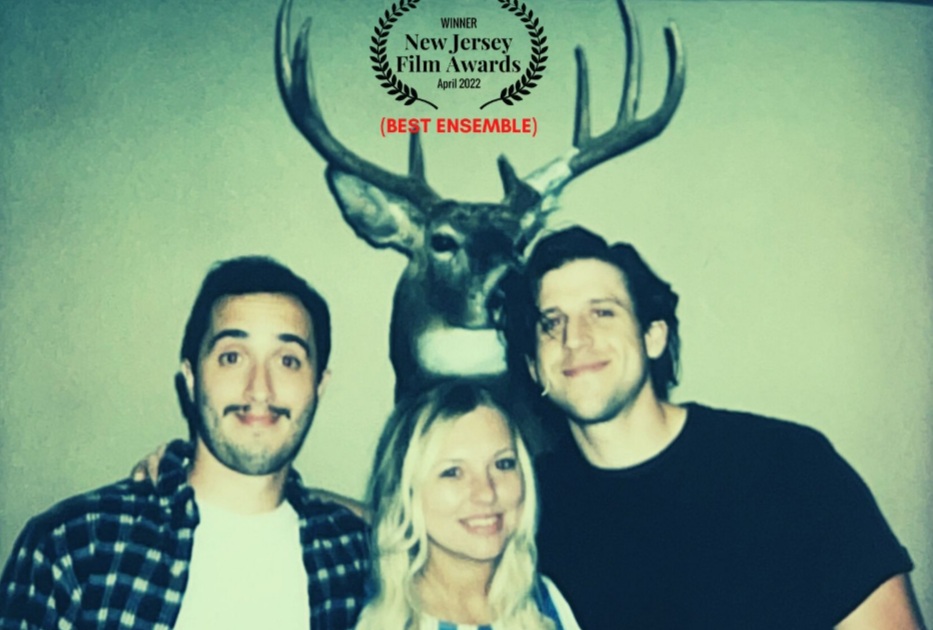 Funeral for Furmanski tells the story of three siblings who are forced to come together to deal with their father’s death. The film opens with a vintage black and white credits scene from the past, flashing between dancers and a foreign language. This helps set the film’s stylistic tone which harkens back to the 70’s decade of films. Writer and Director Johnny Catalano pulls from the past in his filmmaking approach, but oftentimes the big stylistic swings come across as a miss.

From the introduction of the three siblings, it is clear that they have lots of emotional baggage and issues they need to hash out with one another. Chase (Chad Goodwin) is a power hungry, arrogant real estate agent who attempts to help Steve (played by Catalano) move his life forward after their father’s death. Emma (Olivia Dennis) is a wannabe actress living in LA who just wants the night to be over. It is obvious from the opening moments Steve is attempting to make an effort to engage them, but ends up not connecting with them.

Having just come home from the funeral, Steve offers his brother and sister something to drink. This sparks a banal conversation about whether to drink beer, wine, or water. It is palpable that none of them want to be in their old, country home that comes complete with a mounted deer head and antler table adornments.

In the film, Catalano plays these scenes with his brother and sister in a very minimalistic way. Most of his interactions with his siblings are detached and indifferent – until he is ignited into a screaming match. He lets his anger boil out of control, which initiates his siblings into shouting out their feelings as well. But in the end, the arguments go nowhere. Goodwin is capable at playing the arrogant, successful brother, and Dennis plays the indifferent actress easily. The actors’ performances needed much more subtlety and nuance to carry the weight of their father’s death and their feelings toward one another. This all works on a surface level, but the underlying subtext and multi-faceted layers could have helped elevate the film to another level.

Much of the scenes between the three siblings are spent in small talk, happening in the most mundane of ways. Steve offers them food and admits that he only has spaghetti available. Chase scolds Emma for smoking and how bad it is for her health. At dinner, they all chat about the future now that their father is gone – but the future remains unclear for them. All of these are important conversations on the surface, however they tend not to tread too deeply. Much of the dialogue also feels to be improvised in many scenes which took away from the emotional connections that were lacking between the characters. The scenes ended up circling around the same subjects with nothing being accomplished in the end.

To add to the style, and oftentimes confusion of the film, the emotional scenes were interrupted by clips from the 70’s featuring a chorus of singers. The haunting vocals felt out of place and didn’t connect with what was happening in the given moment. Again, this could be a choice made to fuel the concept of the film, but it detracted from what was really going on in the overarching story.

Funeral for Furmanski was a huge undertaking for a fairly new filmmaker. There were lots of interesting ideas and devices put into play. Unfortunately, the film’s emotional arc fell flat and left the viewer feeling unsatisfied and indifferent toward this family.

Funeral for Furmanski tells the story of three siblings who are forced to come together to deal with their father’s death. The film opens with