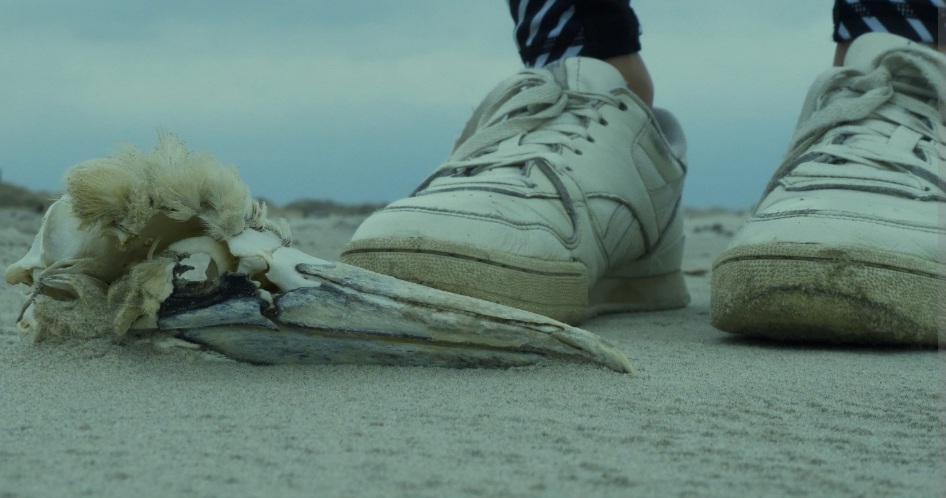 Laced Silk is a suspense mystery that involves a young murdered girl, a long lost brother and a piece of laced silk that links the two tragedies together. Written and directed by Micha Strecker, the film twists, turns and builds suspense, and despite being a little difficult to connect all the dots, the 83 minutes are still worth your while.

The film runs almost five minutes before a word of dialogue is uttered. The sounds and sights of the ocean, the suburban settings and the pertinent interiors take precedent over the pictured characters. In turn, we get a sense that if we just look and listen, the answers are before us.

So we meet Rachel (Sofia Elers) and Daniel (Peter Frogh) under the foreboding darkness of their domicile. He works too much, she’s alone, and he thinks flowers and money does his poor marital efforts justice.

The strain increases with Rachel’s discovery, and with the same material that was left behind at her brother’s crime scene, her grief continues to manifest in Elers’ performance. Largely devoid of emotion, the exterior seems to suffice as a means to cope with an unbelievable tragedy that never healed.

Not much latitude given, Daniel is no more husband-worthy with the new development. Through the arrogant indifference of Frogh’s performance, we’re shown just how lacking he is. “I haven’t seen you naked in weeks,” he selfishly complains.

Daniel is a bad husband for sure, and there’s more he’s involved in that reinforces his lacking. But the doubt the drama leaves is one area where the dots are hard to connect. Aside from elevating his wife’s distress, the viewer is left unsure why Daniel’s bad behavior matters to the plot.

Nonetheless, a Beijing based investigator named Howard Blackford (Atdhe Krasniqi) comes in on the case, and in making the tie to the brother (Ben), he enlists the original investigator. Stuart Morley (Richard Leron Bucher) left Scotland Yard because the case went cold, and adding in the laced silk, he can’t help signing on again.

Blackford’s Beijing mysterious point of origin, and Krasniqi’s impassioned delivery in pursuit of the truth also gives Stuart no chance to turn away. So Stuart dives in like he hasn’t missed a beat, and careful deliberation gets more than its due from Bucher. We feel assured that there could be no one better to go the distance.

The same goes in terms of appearance. His full hair and beard peppered in gray, he’s both a wise sage, and youthful enough to cover all the bases.

Well set up, Stuart retraces the old trail and eventually arrives at a critical oversight in the original investigation. Unfortunately, it’s almost too convenient and doesn’t do proper justice to the ex-policeman’s investigative skills. The viewer is also left in between the dots about the motive.

Still, the pursuit feels worthy. The futility that Bucher and Krasniqi project plays off their dogged perseverance and strings us along in hopes that the breaks fall the right way.

Once again, the panorama of the Micha and Simon Strecker shots reveals a wide view that begs an answer. The ever present and elevated background noise of the ocean, the wind and ground beneath the overall locomotion makes us feel we are getting closer.

The limited use of Matt Stewart-Evans’ searching score also reinforces the importance of everyday sounds that are abound. Then an unexpected ending – and Laced Silk has the ties that bind.

Laced Silk is a suspense mystery that involves a young murdered girl, a long lost brother and a piece of laced silk that links the