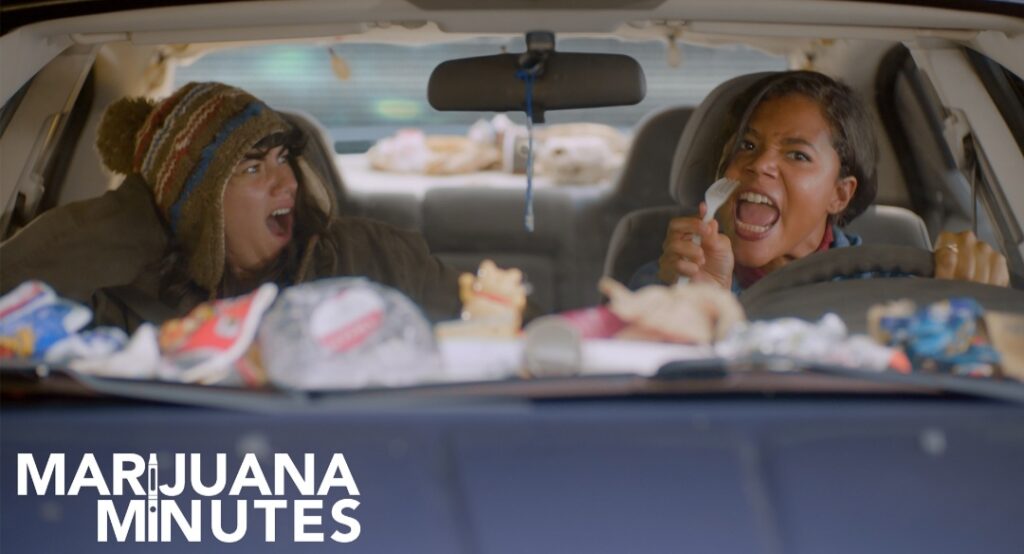 Amy (Rebecca DeMarco) has got slacking off down to a science, and so proficient, she only needs one tool to master her discipline: marijuana. So it obviously doesn’t take long for the 20-something to apply her craft, and we are quickly readied for the type of heady flight that we’ve seen many times before. But who says one good high doesn’t deserve another, and Ryan D. Moore’s Marijuana Minutes will in no way make you feel like you’re just rehashing an old story.

The hook in this 84 minute comedy is that every hit Amy takes makes time rewind as long as she puffs. An interesting plot vehicle, the film doesn’t really take much psychedelic advantage of the twist.

Yeah, so what, because Amy and her cohorts give us plenty to remain happily in the present. A hard rocking indie tune (Cadillac Car by Playboy Manbaby) gets Amy out of bed, and despite her cave coming with all the obligatory clutter, she has no problem locating her bong.

We get plenty of exposition too when Amy tosses her used up deodorant stick into the fish tank. Doing Jeff Lebowski proud, DeMarco shows us that boys aren’t the only ones who can endear as a deadbeat.

The actress doesn’t stray so far from the cinematic male dominance of being a bum, though. Clad in a long flapping wool hat, loose pants and a worn overcoat, DeMarco borrows from the vast lineage of Y chromosome characters in this area. But making her own way, she doles out a perfect balance between boyish cute and coy feminine approachability.

In this, DeMarco is just so much fun to look at and almost makes the movie all by itself. Of course, Amy is not alone, and Clover (Sophia Parola) does plenty to carry the load.

Playing Amy’s bestie/chief enabler, we meet Clover at the office. She makes her living as an Uber driver, and her riders are more like hostages to an attitude that doesn’t take any crap. Paying customers or not, the no-nonsense chick doesn’t hesitate to let it be known that felony level responses are in order if slighted in any way. So the opportunity for in your face one liners are plentiful, and Parola is always up to the task.

She doesn’t pull any punches with Amy either. But more a lion king to her cub, Clover’s armed with enough warped wisdom to keep her friend on the right comedic path. “Some people give hugs, Clover threatens people,” DeMarco hits one of the many Parola setups out of the park.

At the same time, Trevor (Jared Cardenas) also allows Amy to swing away. Her favorite dealer, he’s obsessed with Night of the Living Dead, is sure the government is behind everything, and even if they aren’t, Cardenas almost makes us believe that his character is onto something.

Living with his mom doesn’t even take away the power of our belief and neither does the dated pop art on his walls, the cheap sunglasses and the creepy red robe that is begging to define his importance.

Among the quirkiness, the little visual oddities and physical humor hold their own alongside the dialogue too, and the Monika Kolodziej cinematography also plays along. A sedate, low key suburban background tells us that no one’s levying a judgmental eye at our overgrown adolescents, and the ground remains fertile for the comedy that the film seeks. The same kick back effect goes for the non-edgy elevator type music.

Nonetheless, Trevor is the one who gives Amy the magic vape stick that lets her get back the minutes. So with great power comes great responsibility. Amy does the pothead in us proud by messing with the worst among us. The mailman, an annoying kid and a mom with a baby stroller all get a turn on Amy’s time machine.

Of course, Amy is better than that, and uses her superpower to optimize a date. The paradigm amuses but not so much as to outshine Amy and the whole looniness of the landscape.

But a second act needed, our villains are introduced, and they want the vape stick back. In keeping, Sphen (Moore), Sleezy Evan/Sushi Mane (Evan Dickerson), Big Bad Ramon (Steve Melone) and Dirty Lizzy (Melanie St. Claire) are the nicest, agreeable bad guys ever. Probably indulging too much in their own product, they bumble to the tune of the rest of the characters.

So there’s a bit of a chase to get the pipe back. But the culmination does not reach the height of an Indiana Jones ending or return the built in potential for paradox.

Still, the journey does lay out a lesson and change is ahead for the necessary character development of Amy. Or you might just want to check what you’re smoking. Because if it’s the good stuff, you won’t worry about what’s supposed to happen in a movie, and you’ll be looking for that pipe so you can keep watching this one. 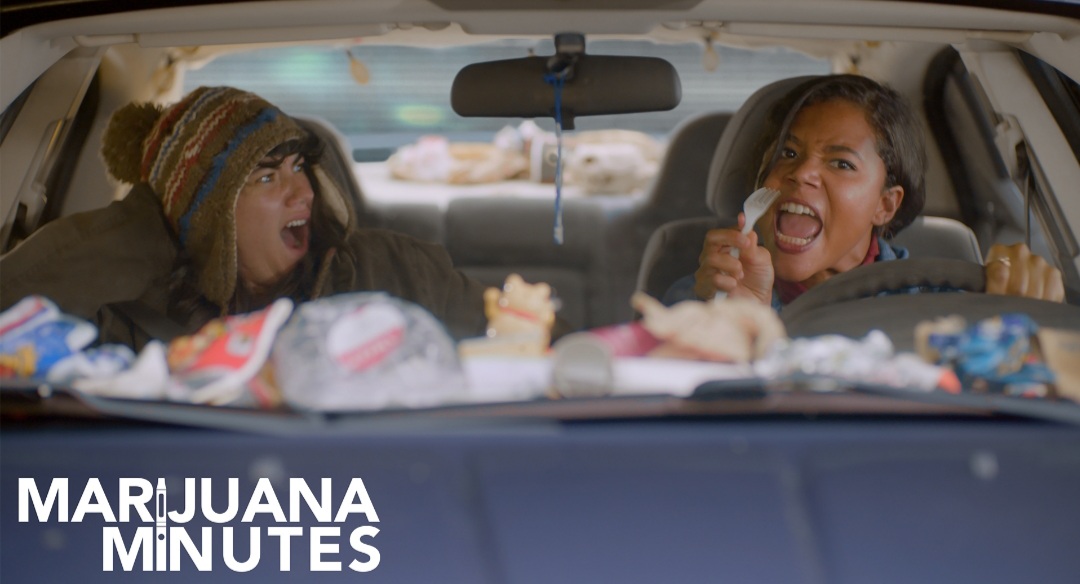 Amy (Rebecca DeMarco) has got slacking off down to a science, and so proficient, she only needs one tool to master her discipline: marijuana. So