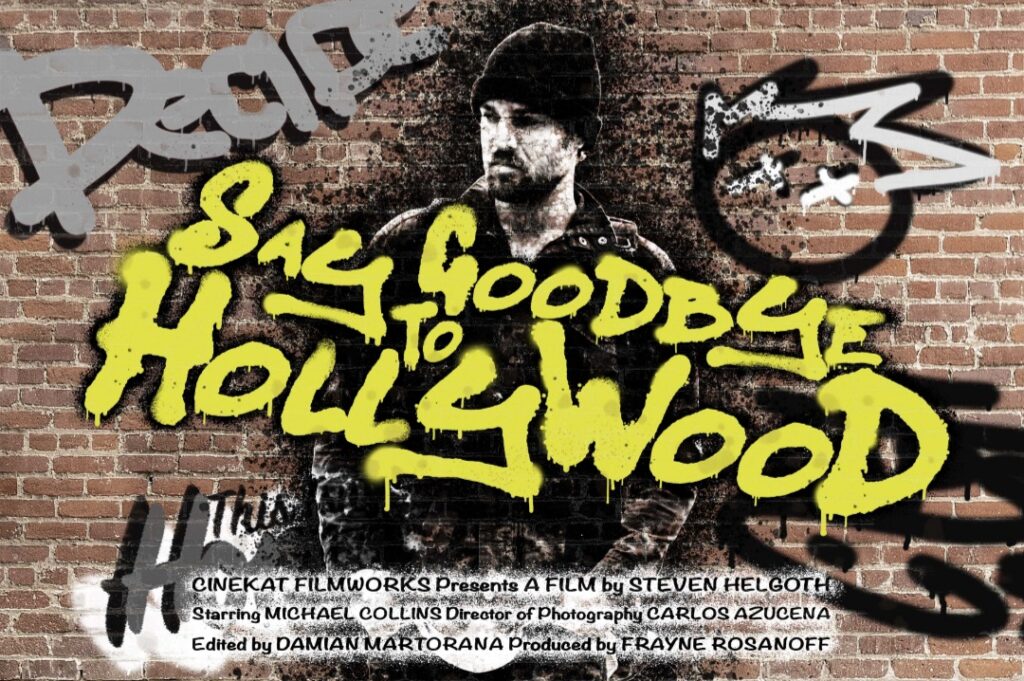 A film that opens with a mysterious man looking at Tarot Cards is not what you would expect from a film with the title Say Goodbye to Hollywood. This is not a showbiz story, although some of it does take place in Hollywood. Steven Helgoth’s feature is speculative fiction based on the realities of the last few years in America; a disturbing vision of what COVID, homelessness, and despair over our culture’s decline could bring us to.

The plot, divided into sections corresponding to various Tarot cards, could be called a mixture of I Am Legend and Dune. Sean (Michael Collins), who came to L.A. from West Virginia on a leap of faith that his talent as an artist would bring him success, wakes up to find himself almost the “last man on Earth” in a deserted Hollywood, where the streets are devoid of all but a few stragglers and everything has closed down. He is living in a tent on the sidewalk, surrounded by garbage, sustained by the pills he keeps gulping down to stave off a nagging cough, drinking water from the gutter, drawing sketches, and wandering through the empty city, looking for someone who will tell him what has happened.

We, the audience, are just as perplexed as Sean, although it doesn’t take much to guess that this is one path that the recent pandemic could have taken. Most humans have either died from “a disease” or gone crazy and killed each other. The only survivors seem to be the homeless.

Eventually, Sean meets a homeless girl, Carla (Balta Monkiki) who has the same name as his former girlfriend. She’s been on the street for a while and has the survival techniques down pat. She also has a pet rat named Sam, who turns out to be a really nice rodent. Sean learns a few things about what is going on in the new world and begins to bond with Carla. But suddenly she is taken away by some mysterious men in white suits, who might be a police force.

It is only after he loses Carla that Sean begins to slowly comprehend what forces are leading him. He meets some other survivors, spiritual women in white, led by a “High Priestess” who tells him that he has a destiny. His dreams seem to be leading him to this plan. Others are having dreams about him. Sam the Rat may be his “spirit animal.” But this may all be a front for something more devious. Can he make another leap of faith and accept the role that the others are pushing him into?

While Sean’s journey interests us, it is also a bit mysterious. The audience is likely to have even more questions than Sean. Helgoth doesn’t give us a particular reason why Sean is seen as a new Messiah by the other survivors. This story begs for continuation. It makes more sense as the first chapter of a series.

But if the savior angle doesn’t quite click, the real value of the film is its relevance to the contemporary crises we live in. It confronts our prejudice against the homeless, comments on the lack of accountability of our leaders, and depicts the decay of our cities.

Cinematographer Carlos Azucena has the hard task of showing central Hollywood and the wooded outland areas of Los Angeles as a wasteland of junk, old buildings, and untamed greenery. To his credit, he renders much of this scenery as eerily beautiful, with constant daytime sunlight.

The performances range from adequate to exceptional. Collins, who also produced, manages to convey Sean’s bewilderment and sometimes contradictory moods. Martell Randolph Rutter seems remote as the High Priestess although maybe that’s because we’re not supposed to know too much about her. Daesha Lynn, as the first Carla, the girl left behind, has a grace that makes us wish we could know more about her. But the really memorable performance is by Balta Monkiki as the homeless Carla. She’s funny, sassy, tough, realistic, and has one of the best comeback lines ever for a female character: when Sean tells her she’s “beautiful,” she responds: “No one ever told me I was beautiful who didn’t want something from me.”

Say Goodbye to Hollywood is a movie we can’t completely say goodbye to, as it leaves us wanting to know more – much more. 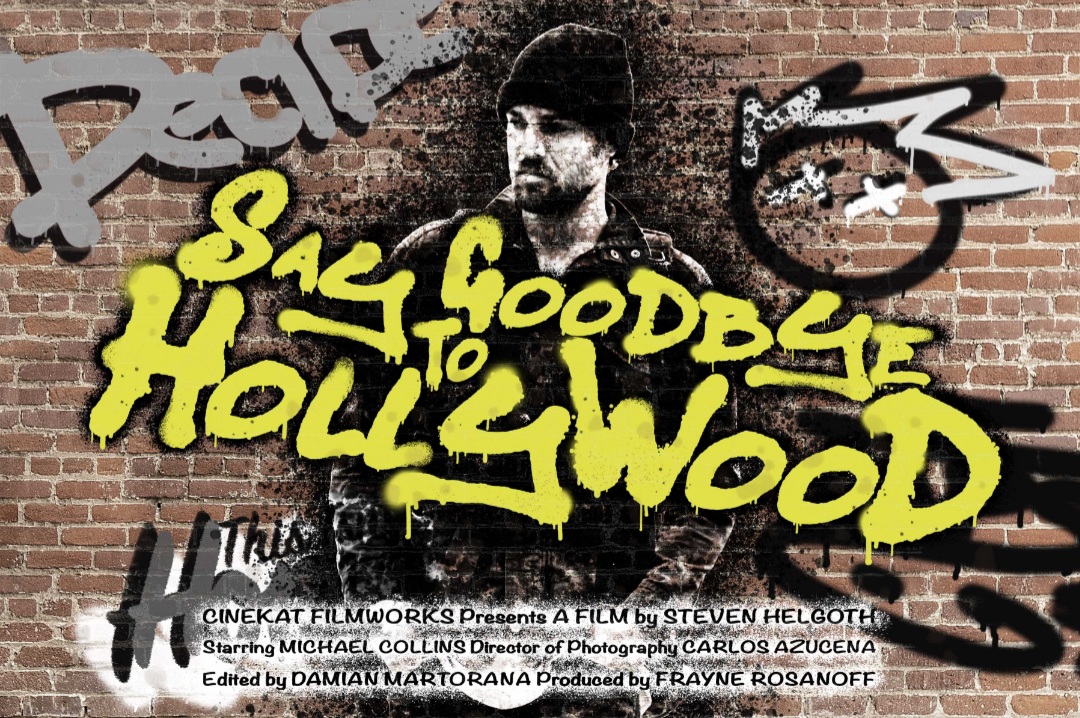