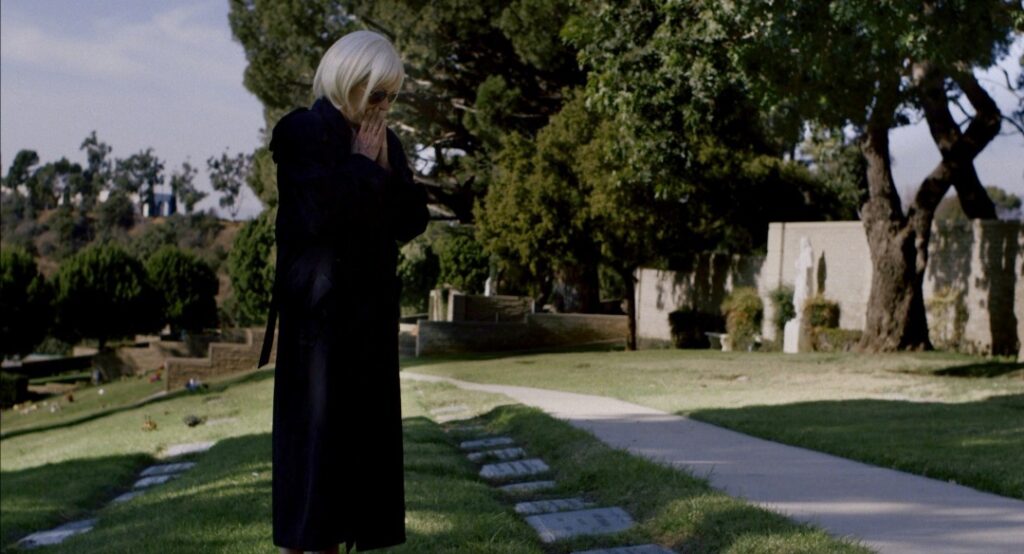 AVA: A TWIST IN THE ROAD

Ava: A Twist in the Road invites viewers into a year in the life of Ava (Catherane Skillen), an artistic and privileged woman residing in Beverly Hills. The film opens with a montage: paint brushes lined up over a palette of dried paint, an emerald bracelet, a fallen gold cross necklace, a Manhattan cocktail swishing, the landmarks signs of Beverly Hills, and a bouquet of withering white roses. All of these images are foreshadowing for elemental imagery that builds the world of Ava.

We first meet Ava, awake in bed, glamorously wearing an emerald bracelet and black lace negligee. Recently, over red wine, her lover Bobby (Bill Lewis) elicited wonder when he handed over a gift: the emerald necklace. She says “I’ll never take it off” and these words serve as a clue. That morning Bobby is busy on calls while Ava pretends to be sleeping. Bobby enters frustrated on the phone with a coworker “waking” her. She can’t believe he’d work on New Year’s Eve. He gave her Christmas in London so what is there to argue? The two have a quick make-out session and we cut to Ava in art class where she patiently volunteers her advice to nervous beginners. From this introduction, we know she’s kept by Bobby and there are many compromises she’s settled for.

Midday she meets up with a friend, Leanne (Tannis Benedict), for “wicked” cocktails. The two barely settle in before receiving a call from Trisha (Maggie Dewan-Smith), an old friend and her husband’s employee. Trisha struggles to reveal that Bobby’s gone. He died in his car of a massive heart attack. Suddenly, no cocktail or celebration is worth consumption. She is shocked by her new solo status.

Ava goes to the morgue to identify the body but her lover’s son, Bobby Jr. (Steve Dellatori), is there and protests her presence. His rage lets viewers in on the stormy transition of Ava into their lives – she’ll never replace his mentally ill mother. At home and alone, Ava runs a knife along her cheek, remembers her early days with Bobby, and even envisions her demise in a bathtub of blood. The tragedy is most potent when Ava appears at the funeral from a far distance; she’s not welcome at the burial of the man she loves, the man who loved her.

Meanwhile, Bobby Jr. (a coke addict) is making every effort to dismantle Ava’s safety net – from an eviction notice to seizing her car. Ava’s fragility soars as she repeatedly has to be told by Trish to not leave wads of money in plain sight; this gesture revealing of Ava’s childlike behavior. She darts from a party that places women in “sugar daddy” arrangements – a devastating comparison to escort work for her. She walks right into a newsstand job that places her on the street for an old friend to see and judge. Friends take in Ava when she’s evicted, then there’s a love interest – but it’s too soon. Throughout the film, Ava struggles to let go of all of Bobby’s gifts which serve as odd little checks to stay afloat in these strapped times.

From clothes to her jewelry, she’s shedding her identity for survival, exchanging memories for meals. Once Christmas rolls around, it’s time for Ava to look at her life. It’s a year ago to the day, and she needs to make some pivotal life decisions.

This film is written and directed by Skillen who stars as Ava. This level of ambition in overseeing a project can challenge the in-front-of-the-camera scenes. The performance of Ava feels detached, anticlimatic, and one-note. Performances in this film veer to soap rather than nuanced drama. The directorial work is pointed and metaphorical as she pairs a flashback of Ava’s mother dying for viewers to weigh against the pain of Bobby’s death. The young Ava (Daniela Brown) is striking in her brief, nuanced performance.

At times, the bulky cast drives the attention away from the core story. It will be hard for some viewers to commit to the plight of a woman who had it all and didn’t protect herself in any way. Had more time been spent on Ava’s youth than the doomed romance, viewers may have more empathy for the frail, but dear Ava.

This story is both a cautionary tale for the well-kept, if not insured – but also a love letter to protecting one’s self. Ava loved a man but lost herself in him; without, she is heartbroken but living on her own terms, a free woman.

AVA: A TWIST IN THE ROAD

Ava: A Twist in the Road invites viewers into a year in the life of Ava (Catherane Skillen), an artistic and privileged woman residing in