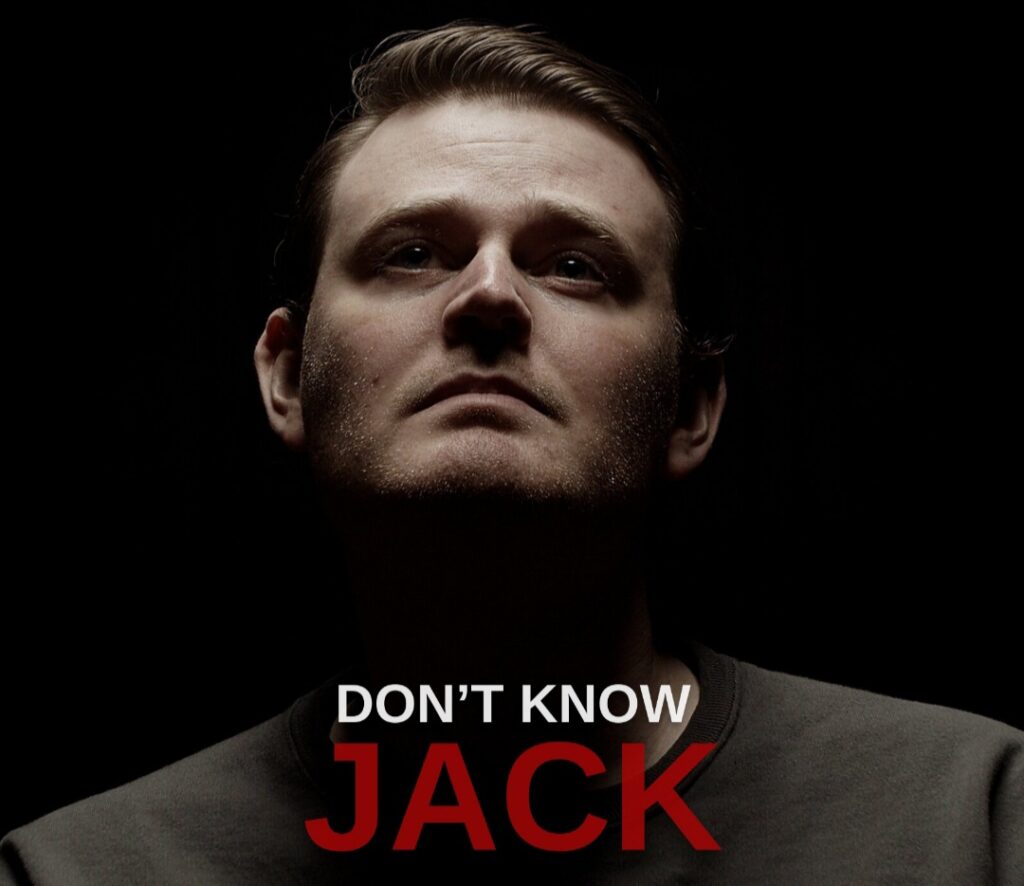 We are Creatures of Love. So much so that all life derives from the emotion. Jack knows from first hand experience. He also doesn’t believe it can last, and having lost on a number of levels, the main character sees no hope in waiting for prospects that will only end in crushing disappointment. The only option: suicide. He just wants to make sure his thought process is correct and Nathan Clarkson’s Don’t Know Jack provides one hour to change his mind.

The black screen giving way in the 60 minute feature, the late dusk exterior of the city reinforces the timeliness, and the heavy piano chords by Joel Clarkson helps signify the weight of the moment. The melodic tone does pick up, though, and Jack’s illumination against the lowly lit scenery has him almost appearing as a beacon of light.

The close-up on his face says as much, and descending into the darkened bowels of a church, we get the sense that this man has found himself. A full six minutes to convey the feeling, Jack (played by Clarkson) definitely has. But the music ends abruptly with a wrap on the door, where we meet the person who is actually on the clock.

Leslie (Ron Scott) runs group therapy for the church and Jack gives the social worker the dire ultimatum. “Just in case I’m wrong, I’m going to give you one hour to convince me not to kill myself.”

Thus, Clarkson’s restrained delivery lets us know his character has thoroughly thought his decision through, and this final step is simply a matter of due diligence. Leslie does not dismiss the dispassion of his new client either, and refuses to stray from his professional role as a behavioral therapist.

In other words, Leslie engages in a back and forth like any other session, and Scott’s noninvasive sparring doesn’t allow Jack’s instigation to interrupt his process as a healer. So for instance, when Jack provocatively accuses Leslie of resorting to the typical tricks of the trade, Scott’s delivery holds back like a therapist should. So Leslie is left in prime position to not take the bait.

Still, Jack remains on course and proceeds by giving Leslie the chance to do his job. In this, we get a look at Jack’s life.

First we meet his mother (Meissa Hampton). The blonde hair and blue eyes of a matriarchal angel, Hampton’s eyes draw you in and exude empathy. “She was someone who tried to make ugly things beautiful,” Clarkson oozes with sincerity.

Of course, the father who left is counter to the light, and not getting a clear look until the end, Dad symbolizes abandonment. The ever present void then leads into the lost love of Jack’s life.

Jenny (Kristen Grace) had entered his life as a gift, and her stunning looks eventually become secondary to a tender relationship that redefines Jack. Unfortunately, past loss cannot save him. But for our purpose, Clarkson’s stoicism conveys that Jack’s walls are in no danger of falling in the retelling.

Status quo well preserved, the exchange actually gives the hope that this session will lead to a follow-up as it would in any other case. On the other hand, this pseudo session is filmed with both men completely surrounded by darkness, and the Travis Sherwood cinematography is meant to imply that there’s much we still don’t see. In tandem, the clock is ticking, and the reserved struggle between the two unravels in favor of the men behind their masks.

So by the time the characters fully reveal for us and themselves, the hour will be up, and no matter what happens to Jack, both men experience a profound healing. One that extends to the viewer and makes Don’t Know Jack well worth your while – no matter the copay.

We are Creatures of Love. So much so that all life derives from the emotion. Jack knows from first hand experience. He also doesn’t believe