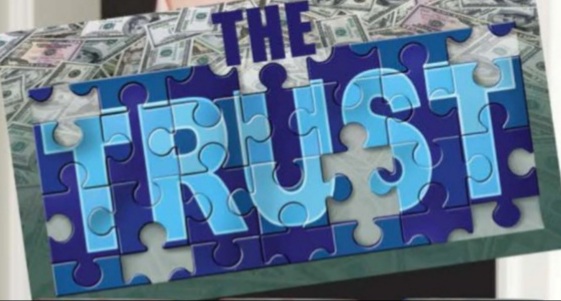 Being rich isn’t as easy as it looks, because when you can buy anything, avoiding pain is well within your price range. And since the source of most of our distress is right at home, the affluent can easily distance themselves from conflict with all the things that they can buy. The downside is they lose the opportunity to gain closeness from resolving the travails that most of us can’t afford to sidestep. Pretty tragic, but so would giving up the chance to poke fun at the decadence of the rich, and The Trust really levels the playing field in an 11 minute comedy.

The news reports at the outset of the Harris Shore short tells us that Covid has hit our shores and in a very real, impactful way. On the other hand, the accompanying score consists of a very nondescript sequence of piano notes that imply the characters to come have just about as much depth.

Nonetheless, the bad news at the heart of the comedy is revealed on a zoom call between Baron (Colin Thomas Jennings) and his Mom (Constance Forslund). Dad contracted Covid, went into a coma and died.

Even so, Baron does seem genuinely broken up by his father’s sudden demise, but the fact that he calls his parents Mommy and Daddy shows how ill equipped he is to deal with real life. So it’s no surprise that his true colors emerge.

His mother Karen, on the other hand, shows no signs of a façade. Beginning her day like a champion, the matriarch downs her daily dose of breakfast bourbon, and the heavy makeup and pearls completely fail to put a maternal mask on her grossly self indulgent alcoholism. Thus, Forslund gives us a delivery that lost touch with the demands of the real world so long ago that she couldn’t find remorse even if it was buried between the lines on her face.

Baron does seem to yearn for a mother who could, though, and Jennings’ seething anger plays off Forslund in complete futility. Of course, in the end, the apple doesn’t fall far from the orchard. The zoom call gearing up with the family lawyer (Joe Nassi), Baron has his mind elsewhere. “Hey can we speed this up Stan, I have a Tinder date in about an hour,” Jennings seamlessly replaces anger with entitlement.

No declared genetic tie, Stan inappropriately joins in, and Nassi’s odd engagement sheds enough respectability to make a case that a stray mailman might be part of an untold family history. All together, the trio pings the decadent irony around, and the humor ignites on a slow burn. That is until Kenisha (Tangie Ambrose) shows up and takes off the comedic gloves.

She is Dad’s CPA, and up until this moment, a complete unknown to Baron and his mommy. Around 25, Ambrose provides a wonderful mix of the street, and what happens when the only escape is a cut rate education at the local community college.

Of course, her low standing goes right along with her position as Harvey’s Personal Advisor, and with the obvious implication, the Trust is not as straightforward as it seemed.

So let the cat fight begin, Kenisha has no problem trending toward the dark side to gain the upper hand. “Don’t you get up all in my face Karen, and don’t let my beauty and prosperity confuse you. I come from the south side of Chicago,” Ambrose’s deadpan sinks in the incisors.

Her chops are enhanced even further by the fact that her persona is almost too big for the perfectly framed zoomed imagery of Nate Weber. All that’s left is a plot twist. No matter, the entitled interplay continues, and without any remorse on our part either, we can take boundless glee in the knowledge that the rich. . . get everything they deserve.

Being rich isn’t as easy as it looks, because when you can buy anything, avoiding pain is well within your price range. And since the