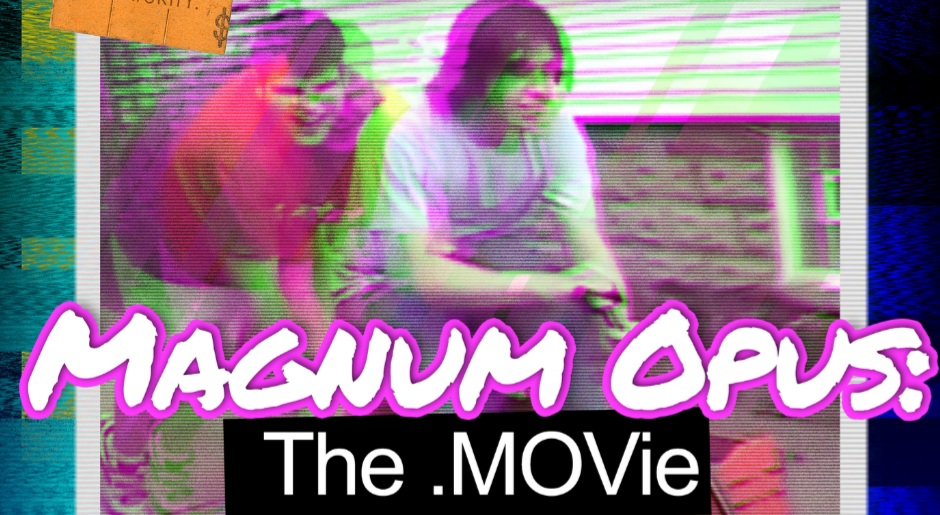 Don’t try this at home is a trope we’ve all heard before, and the elders among us are the first to say that their adolescent wisdom required no such warning label. Well, the generations prior to MTV didn’t have Jackass. So the better sense of adults was no match for the youthful glory that rebellious fans decided they should strive for. This, even with the disclaimer the franchise posted at the outset of each installment, and director Addison Binek can attest firsthand to throwing caution to the wind. But there’s no reason to take his word for it. He and his cohorts went all home video in the early 2000s, and Binek has put together the clips into a film called Magnum Opus: The .MOVie. Sixty three minutes in length, the documentation will definitely rekindle the irreverence of youth. On the other hand, there’s only so much homage of this type that one can take before you’re begging for the retelling to stop.

Either way, in the absence of drugs, alcohol and female companionship, teenage boys will find ways to entertain themselves, and the opening implying the far reaching void, we are endearingly brought back. One among the Opus roster recklessly jumps off the monkey bars, and in the abandon, every man-child among us probably sees himself.

Moving forward a few years, you can see that Jackass has become an influence. The stunts become more sophisticated and pain inducing. Their attitude hasn’t changed, though, and there’s no reason why we can’t revel in their fun.

The laughs and groaning acceptance of their real time reiterates the sentiment. Unfortunately, as the iterations continue, the inside joke they share loses its entertainment value.

But that’s to be expected. A group of teenage boys shouldn’t be able to take a home video camera and formulate scenarios like the pros. Just looking at Johnny Knoxville makes you laugh, and without a doubt, plenty of development and thought was required to present the amusing pictures that the franchise framed.

So that’s where the adults have to enter the room for this film. Binek and his friends could have gotten on screen to put some backstory behind the stunts and what the actual outcomes were. How many times was the emergency room employed? Did their parents ever wonder where all the bruises were coming from? And how many times did the group run afoul of law enforcement or school officials?

They also could have told us what their lives were like at the time. It’s hard to imagine that any of them had girlfriends or were among the popular kids. Otherwise, they wouldn’t be jumping off roofs – and not only would such a digression give common cause – a split screen or voice over commentary provide plenty of opportunity for comedy.

Instead, impaling staples into their own arms or sticking a finger into a live mouse trap elevates the needlessness of it all and does nothing for us to endure the cringe worthy nature of the unending self abuse. Even the Jackass generation of disciples would probably tire at some point.

Quite a slog it turns out and, unfortunately, the filmmakers don’t figure out the importance of context until the end. We see a few of them today, laughing at themselves all these years later, which finally gives us something to hold on to. However, there’s no time limit on the footage or an idea, and putting pen to paper like the prior Jackasses, could still yield something pretty good.

Don’t try this at home is a trope we’ve all heard before, and the elders among us are the first to say that their adolescent